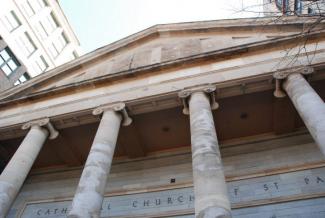 As Occupy Boston protesters regroup following the recent close of their Dewey Square encampment, the Episcopal Diocese of Masschusetts' Cathedral Church of St. Paul has offered them meeting space for their general assemblies, beginning Tuesday, Dec. 13.  The general assemblies are open meetings through which local Occupy participants come to consensus about future actions.  The evening meetings take place on Mondays, Tuesdays and Fridays.

The Episcopal Cathedral Church of St. Paul, located at 138 Tremont Street in downtown Boston, has offered to host the meetings on a week-to-week basis, as needed, and is doing so not to endorse a particular point of view but instead "to endorse the conversation," according to the cathedral's dean, the Very Rev. Jep Streit.

"The issues raised by the Occupy movement are important to be discussing in society, and so I'm happy to offer our cathedral to provide hospitality and a venue so those conversations can continue," Streit said, noting he felt that attention had of late shifted to controversy over the protesters' encampment and away from the economic and social justice issues at hand.