Dinah's House opens as center of hope in Haverhill

It’s like a living room, a recent visitor said of Dinah’s House, the new storefront ministry now open on Emerson Street in downtown Haverhill, “a living room within our busy city where women feel at home, safe and supported.”

Sponsored by nearby Trinity Church, the new drop-in center is described by its founders simply: it's a center of hope for women and children. 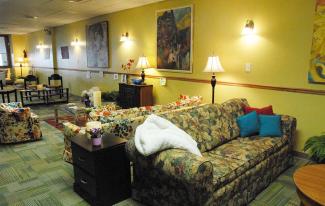 Patricia J. Bruno Dinah's House offers comfortable space for conversation and connecting with resources. Cox, the deacon serving at Trinity Church and the one who first envisioned how a place like Dinah’s House could help women in oppressive situations find their way forward.

“Eventually we hope to reach through Dinah’s House those who are trafficked and sexually exploited,” Cox said. “But before that can happen, my heart says this:  that unless women of all ages can come somewhere where they can be loved and cared for without any conditions, without any hoops that they have to go through, without anything they have to change first, we may never know what their needs are.  We may never find them.”

With limited initial start-up funds, donated furniture and a cadre of volunteers, Dinah’s House has been up and running now for a couple of months, hosting open houses, twice-a-month family fun days and regular drop-in hours over several days each week.

The idea is to become known in the community, both to women who need help and to other church and social service groups with resources to contribute.

The Rev. Brian Raiche, Trinity’s associate rector, helped find and secure rental, late last fall, of the building where Dinah’s House is making its home.  “We looked for a place that was close to the church but kind of in the hub of the city.  It’s in an area where there is a lot of need, and it gets a lot of foot traffic, so it’s well located,” he said.

He described it as open and airy, with lots of artwork on the walls, comfortable areas for conversation and space where children can play. 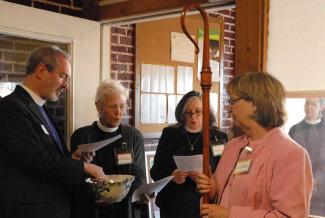 Patricia J. Bruno Bishop Gates, with the Rev. Jane Bearden and the Rev. Gay Cox, joins with Trinity Church members and friends to officially bless Dinah's House. Bishop Alan M. Gates visited Dinah’s House in April to give it an official blessing, and said he came away with a sense of the potential power of simply offering Christian hospitality.

“Christ in the Gospels had conversations with people in death-dealing circumstances all the time.  What’s happening at Dinah’s House is that kind of invitation, the forging of trusting relationships that will free people to speak their needs,” Gates said.

“It’s also an extraordinarily fine illustration of the reclaiming of the diaconal order in this diocese, because the impetus has come from Deacon Gay Cox and her passion to reach those caught in the evil net of sex trafficking.  Her diaconal voice and passion called to other members of the church to step into the world and see what they could do about this.  That is exactly what a deacon is called to do,” Gates said.

When Cox came to serve at Trinity Church in Haverhill, she brought with her several years of experience working with Amirah, Inc., a Boston-area faith-based nonprofit provider of refuge for people trying to get out of situations of sexual exploitation.  That work gave her eyes to see similar needs in Haverhill, and she found willing partners in the people of Trinity Church, who were ready to engage because of ongoing discernment they had already been doing as a parish over recent years to get more involved in outreach to their city.

Trinity Church ministers within what its clergy leaders say is a huge gap between those who are financially wealthy and those who are poor.  They describe Haverhill as a juxtaposition of acreages, expensive housing and golf clubs with a dense city center population served by one of the state’s larger homeless shelters.

In the church’s downtown neighborhood, drug abuse is high, they say, violence is prevalent and prostitution increasingly evident.

The Rev. Jane Bearden, Trinity Church’s rector, puts it plainly:  “In Haverhill, you can work in Dunkin’ Donuts for $9 an hour or you can prostitute yourself and make $800 a night.  Let’s say you’re a single mom, trying to get your GED, going to school in the daytime, inviting men from more affluent communities to come in at night so you can feed your children—that’s a reality that we live with every single day here,” she said, never mind any number of other scenarios involving drug addiction, physical abuse or trafficking.

“We’re trying to address the needs of a particular population in the city that is underserved right now,” Bearden said.

She and the parish, she said, see Dinah’s House as a progression in Trinity Church’s growing outward reach, which already includes its Joyful Ladle weekly meal program, a creative arts program for neighborhood children that grew out of a successful effort to provide music lessons and a Montessori-styled afterschool program called FEAST—outreach now strengthened by Trinity’s partnership with area Episcopal churches through the Diocese of Massachusetts’ mission hub initiative.

Dinah’s House is a natural next step, Bearden said.

“We’re redefining what it means to worship God,” Bearden said of Trinity’s recent growth in 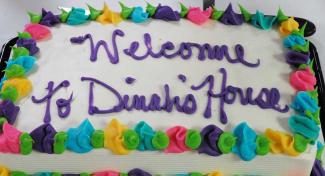 Patricia J. Bruno A sweet welcome at the official blessing and open house in April. numbers and service.  “Worshiping God at Trinity is about who I am 24 hours a day, seven days a week.  And being with those women at Dinah’s House is just as much worship as raising the roof on Pentecost.”

Associate rector Brian Raiche credits Cox and Bearden along with the people of Trinity Church.  “I think it’s been a lifetime of service and ministry that Gay and Jane have put in that actually allows them to come to this point to really make Dinah’s House happen,” he observed.

Cox said that things are coming together at Dinah’s House at an unexpected pace, something that Bishop Alan Gates seconded.

“The rapidity with which other congregations, civic leaders and community organizations have stepped up to be a part of this has been a real affirmation of the ministry,” Gates said.  “It’s clearly struck a chord and identified a need that others had seen and are grateful Trinity is initiating a response.”

Finding more funding and administrative staffing are the next immediate hurdles.

“We’ve done the provision of the place, we’ve furnished it, we’ve done open houses and various activities, we’ve made initial contacts all over the place, thanks be to Jane’s work over these past years, and we’re now at a point of wanting to develop outreach among the women and the children that we’re aiming to serve, and that has just begun,” Cox said.

The new ministry’s name was inspired by the biblical character, Dinah, whom Trinity’s summer book group encountered in a fictionalized account of her life in the novel The Red Tent.

“Dinah was the daughter of Jacob and a midwife,” Bearden explained.

“And abused,” Bearden said.  “We’re trying to midwife women who are caught up in a spiral of violence and despair and give hope.”