Diocesan Convention brought together about 500 clergy members and delegates from each of the diocese's congregations on Saturday, Nov. 2 at the Cathedral Church of St. Paul in Boston for legislative action and worship, this year under the theme "Gratitude and Celebration."

The convention voted to continue the antiviolence campaign it initiated a year ago, and it took positions in favor of establishing a state carbon tax and on divesting church funds from fossil fuel companies.

Convention also approved the $8.2-million diocesan budget for 2014 and elected deputies to the Episcopal Church's triennial General Convention in 2015.

Among other highlights were two meditations given by Bishop M. Thomas Shaw, SSJE, who announced he will retire in September 2014, and a sermon by Bishop Suffragan Gayle E. Harris challenging the church to confront racism.

This year's Mission Tithe Council Grant of $25,000, funded by the diocese's recently completed Together Now fundraising campaign, was presented to St. Paul's Church in Newburyport and its El Salvador mission partner, Foundation Cristosal.

Two new mission hubs, also funded by the Together Now campaign, were announced: one in the Merrimack Valley and another for Plymouth, Cape Cod and the islands. 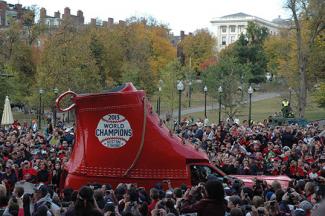 Tracy J. Sukraw The scene outside the cathedral as the Red Sox victory parade rolled by

An offering of $6,325 was collected and will go toward the purchase of a truck needed for the food program at St. Luke's-San Lucas Church in Chelsea.

Convention managed to complete all its business, even as the Red Sox World Series victory parade rolled through a fan-clogged Tremont Street, lending a festive air and lots of confetti to the proceedings. Logistical complications were mostly mitigated by good spirit, as convention-goers put on their Red Sox gear and took a break during the morning's agenda to enjoy the parade.

The first is a nonbinding call for numerous commitments and actions by various entities, all under the umbrella of "environmentally responsible investing."

It asks that "all members of congregations and all affiliated organizations" make "a moral commitment" to reduce their carbon footprint and fossil fuel use and to get involved in various kinds of advocacy toward the same.

It also asks that "all managers of Episcopal endowments" freeze "all direct investments in the Carbon Tracker top 200 fossil fuel companies" and that the Trustees of Donations (the board that oversees diocesan trusts and investments, as well as those of a majority of diocesan parishes) report back next year with a plan for making the Diocesan Investment Trust free, by November 2018, of investments in fossil fuel companies that are not deemed "best in class." 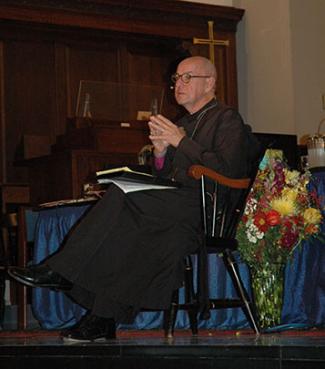 The resolution also calls on the Trustees of Donations to design "an alternative investment vehicle" that excludes fossil fuel production companies; to conduct a survey to gauge interest in such a vehicle; to report widely on its findings; and to activate the alternative investment option, if feasible. Congregations and "other affiliated institutions" are asked to adopt similar policies.

"The Diocese of Massachusetts has been a leader in the church in justice making throughout its history, particularly in civil rights," retired bishop suffragan, the Rt. Rev. Bud Cederholm, one of the resolution's sponsors, said in presenting it to the convention.  He said that it's time for the diocese to join other faith denominations, universities and municipalities who are "divesting so we can reinvest in an alternative vehicle."

"The resolution commends the proxy and shareholder actions of the Trustees of Donations, but it's not enough to just continue on that path, and we must join the divestment movement," Cederholm said.

The resolution was adopted with no debate.

Convention went on to spend 15 minutes debating a second measure calling for support of "efforts to establish a carbon tax to discourage the use of fossil fuels" and asking the convention to endorse Massachusetts House Bill 2532, which proposes a state tax on certain fuels to raise revenue for one or more of a variety of transportation measures.

The Rev. Stephen Ayres of Old North Church in Boston, one of the resolution's sponsors, spoke in favor of carbon taxing as an incentive for reducing fuel consumption.

"When we talk about the damage that climate change is doing to the nation and the world, we need to realize that the carbon that is impacting climate change is coming from the fuels that we purchase and use in our homes and cars. The most direct way to encourage us to reduce our demand for that fuel is to tax it," Ayres said. 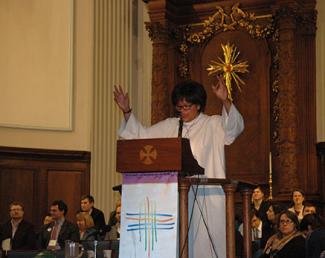 Delegate Michael Pierce of Trinity Church in Canton spoke against the resolution, calling House Bill 2532 "largely a regressive tax bill that only has a limited amount to do with reducing use of carbon fuels." He pointed out that revenue from the bill, as currently written, could be directed toward central artery tunnel debt and other state transportation programs "that need to be under much more scrutiny."

Most of the debate avoided the specifics of the bill pending at the State House and was focused on the general concept of carbon taxing.

Proponents described it as financial incentive for taking moral action.

"I think a carbon tax is putting our money where our mouth is," the Rev. Thomas Brown of the Parish of the Epiphany in Winchester said. "I think it's a much better path than divestment, and I urge you to support it."

"It's a real battle to get people to see the damage that's being done to our environment and to God's creation, and somehow when you put money on it, or you tax it, it makes people wake up," delegate Hilary Greene of St. Mary's Church in Barnstable said.

The Rev. Bob Massie of St. James's Church in Cambridge described a carbon tax as a remedy to "a market failure," in which true cost is not reflected in price.

"It is absolutely routine for governments to step in and to correct for these market failures by imposing certain conditions or taxes," he said. "It's all this bill is doing, in a certain sense, because carbon is imposing enormous costs on all of us, and yet it isn't reflected in what is actually being paid."

"The true cost has to be paid because it's being paid in other ways," the Rev. Deborah Warner of the Church of the Messiah in Woods Hole said, citing public health as an example. "This will force us to change, and the time is now," she said.

"It sucks to be poor with winter coming on," Matt McKeon, a delegate from St. Andrew's Church in Methuen, said. "I really can't approve of anything that's going to make the heating oil bill go up. It's not a luxury item. It's a basic commodity. I think what we have here is in fact a sales tax that affects poor people a lot more than everybody else."

Jack Smith, a delegate from St. Paul's Church in North Andover, also spoke on behalf of those who struggle to pay their heating bills, especially the elderly, and said that increased transportation costs will also increase food prices.

"We are years away from really efficient non-carbon-based fuels," Melissa Lamb, a delegate from St. Mark's Church in Foxborough, said. "The companies who pay these taxes are going to just pass these taxes on to us, and in this economic climate, I don't think now is the time to add another tax onto the average American who really doesn't have much choice right now about what they can do and what they can't do."

The resolution ended up passing by a small majority.

Diocese continues support for B-PEACE
Convention unanimously approved a resolution asking for a continuation of the work of the Jorge Fuentes Antiviolence Task Force, established by last year's convention in memory of the 19-year-old member of St. Stephen's Church in Boston who was murdered in September 2012. 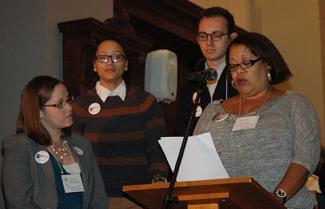 The resolution calls congregations to get involved in at least one of several areas identified by the task force as "action steps toward peace," around which the diocese's B-PEACE for Jorge antiviolence campaign has developed over the past year: youth programs; jobs for teens and young adults; partnering with underresourced public schools; youth and family support; gun law reform; and education about the root causes of violence.

The resolution also asks for the development of "a training for trauma response and resiliency education for clergy and lay leaders" to be approved at next year's convention.

Fuentes's mother, Mirna Ramos, offered her thanks to the convention, saying, "Jorge cared about other people and was a peacemaker in his community." The diocese's B-PEACE campaign, she said, is "for all the Jorges" and "a reflection of who my son was."

The effort's lead organizer, Julia MacMahon, said collaboration with others already doing antiviolence work is critical to the effectiveness of the diocesan campaign, and cited relationships with groups that include the Massachusetts Coalition to Prevent Violence, Citizens for Safety and its "Where Did the Gun Come From?" campaign and the Boston Private Industry Council's youth jobs program.

"While we here have the passion and the resources, we are not the experts in this work, and in order to be successful and effective, we must connect with individuals and organizations who are ready and willing to collaborate with us to effect change," she said.

"We've had over 1,000 people be involved over the last year and it's truly been inspiring. We look forward to growing deeper in our relationship with each of you as we continue to address these dire issues," she said.

Budget
Convention unanimously approved the budget for 2014, with no debate. It reflects core and supplemental revenues and expenses totaling $8.2 million. 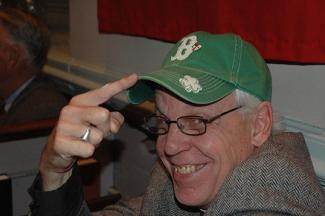 “A budget reflects the perceived priorities which we believe God is calling us to establish in the coming year, bearing in mind that it is God’s abundance over which we have been given stewardship,” Lisa Garcia, outgoing diocesan treasurer, and the Rev. Stephen Voysey, Budget Committee chair, said in their written introduction to the budget.

“We believe our work in preparing this budget represents a good faith effort to provide financial support to the greatest effect possible. As required by canon, the budget is balanced and reflects the diocesan mission strategy,” they said.

Also elected was the Rev. Margaret Schwarzer of Grace Church in Newton, to the Trustees of Donations.  (Results of uncontested elections are listed here.)

In other business, the convention:

Voted on several procedural matters related to the April 2014 election of new bishop;

Approved membership appointments to the Commission on Ministry, the body responsible for the ordination process; and

Joined Bishop M. Thomas Shaw, SSJE in honoring several groups and individuals: Jack Cogan and Mary Cornille for their committed support of diocesan ministry; Rafael Soto for his leadership and ministry at St. Luke's-San Lucas Church in Chelsea; and the Bethany House of Prayer and Society of St. John the Evangelist for their ministries nurturing faith life in the diocese.

All convention actions and materials are available via the Diocesan Convention 2013 page.