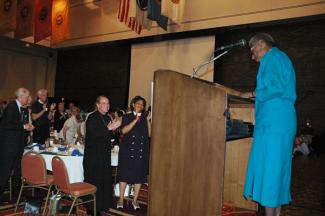 Bishop Barbara C. Harris (r.) receives standing ovation at the ECM annual dinner from, among others, Bishops Tom Shaw and Gayle Harris (ctr.). Episcopal City Mission (ECM) honored church and community leaders for their social justice work during the organization’s annual banquet at Boston University on June 10, inaugurating a new award in the name of church pioneer Barbara C. Harris. She is the retired bishop suffragan of the Diocese of Massachusetts and the first woman to become a bishop in the worldwide Anglican Communion.

The Rev. Jane S. Gould, Rector of St. Stephen’s Church in Lynn, and Sarah Johnstone, a graduate student in biology and member of the Episcopal chaplaincy at MIT, were the recipients of the Barbara C. Harris Award for Social Justice, established this year by ECM to honor women “who have demonstrated commitment and competence in the work of social transformation.”

Gould was cited as “a relentless organizer and advocate for social structural change affecting the most vulnerable among us” through work that is “an expression of her theology of engagement formed and informed by a holistic reading of the Gospels…and liberation theology.” Johnstone, who has served on the steering committee of the Episcopal chaplaincy’s Technology and Culture Forum at MIT, was honored for organizing public events that have included a teach-in on the war in Iraq, a campus effort to raise awareness of the dangers and costs of nuclear proliferation and a series on ethics in international development.

This year’s Robert E. Tobin Award for Social Justice went to the Rev. Timothy E. Crellin, Vicar of St. Stephen’s Church in Boston, for his ministry with city youth that includes the development of successful summer and afterschool programs, anti-violence advocacy and building partnerships between suburban and city parishes.

Two additional awards, in honor of the late Bishop Morris F. Arnold, went to Janet Proli, founder of the Among Friends Meal Ministry at St. Paul’s Church in Newburyport, and to One Family, Inc., an organization devoted to ending family homelessness in Massachusetts.

Bishop Barbara C. Harris addressed the gathering of 325 parish delegates and supporters with a call for “some holistic analysis that will move us away from continuing to treat the symptoms of the problems that pervade and permeate our society to attacking their root causes.”

Increased and coordinated community investment of time, talent and treasure is needed, she said, as well as “some new intentional major partnerships between institutions of our society—secular and religious, public and private—that address the needs of the whole human being, temporal and spiritual, and the good of the whole human family.”

“The more we feel forced to establish shelters for the homeless, the less will be done about housing people properly,” she said. “The more soup kitchens community organizations and churches open alone, with only token handouts from the public and private sector, the less we call the society into account for the causes of hunger.”

Community builders are called to prophetic witness, she said, “on behalf of the poor and powerless, a witness that questions the unquestioned, that notices the unnoticed and challenges the unchallenged notions of class and privilege in our society.”

She asked her listeners to take on community investment out of thanksgiving and with hope for the future. “This means embracing the paradox of our existence and the total human situation. It also means embracing and articulating an idealism which carries us into a future, yet unborn, not only with hope, but at the same time with a realism born of the memory of past and present failures of our dreams,” she said.

In other meeting business, ECM’s executive director Ruy Costa announced that a highlight of the organization’s program year is the “repositioning” of the Pelham Fund for Economic Justice toward the goals of growth and operating efficiency. Going forward, ECM will be the sole owner of the fund—until now a joint effort with the Diocese of Massachusetts—and will increase its investment to $1 million, nearly doubling the size of the loan program. It helps marginalized entrepreneurs in low-income communities launch small businesses and cooperatives.