In the House: An interview with new House of Bishops chaplain Stephanie Spellers 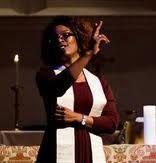 The Rev. Stephanie Spellers The Rev. Stephanie Spellers, priest to The Crossing, the emergent worship congregation at the Cathedral Church of St. Paul in Boston, was recently named one of two chaplains to the Episcopal Church’s House of Bishops, a two-year appointment that she shares with the Rev. Canon Simon Bautista, Latino Missioner in the Diocese of Washington (D.C.).  Fresh from her first meeting with the House of Bishops in March at the Kanuga Conference Center in Hendersonville, N.C., she shared her thoughts on what it means to be a pastor to the pastors, what the house looks like on the inside and the need for a little shock therapy.

I was thinking about this word “chaplain” and pulled out my dictionary, which says:  “A clergyman or sometimes a layman appointed to perform religious functions in a public institution, club, etc.”  Clearly it’s time to get a new dictionary.  From your point of view, what is a chaplain, and what is a chaplain to the House of Bishops?
Oh, wow!  I really did have to do some word study myself, and I understand it to be a person who is going out to a place where people are living, working, pursuing a vocation and supporting them in that vocation and helping them to see something of God’s life getting lived out in that context.  So to be chaplain to the House of Bishops, I’m basically the pastor to the pastors.  I’m supposed to be here in order to help the bishops do and have the vocation they’ve been called into.  And so, if they need three liturgies a day—and apparently they do!  For six days in a row!—then we’re the ones who organize that.  They need to have private spaces where they can pray.  They need some silence.  They need laughter.  And what I found when I got there was that they need energy.  They need encouragement.  My heart grew for them and for what they take on on a daily basis.

Usually the bishops, the episcope, are looking out over the rest of the church, and in your new role, you kind of flip that.  When you looked out over the bishops, what did you see?
I saw people who are incredibly devoted, and I kind of feel like I saw a mantle.  That’s why my heart grew for them, because it was impossible to look out over them without seeing everything they carry.  And I saw a real live community.  It’s not something most of us know.  They live in this house together.  And folks from different sides of issues genuinely walk together.  I felt more confident about communion because I could see the way they love one another.  They are very real when they get in there together.  There is still a great diversity of people in that house.  I think people have worried that with the departure of certain factions or certain ideological groups that the House of Bishops would become very homogeneous, and it’s not.

Some worry because there aren’t so many women there.
Now that’s true.  When I looked out I saw a house that is still overwhelmingly white and male.  But I heard a conversation about the future of the church that, again, made me feel that something is possible, that with this group of people and with all of us working with them, something new is possible!

Is there something in particular you really hoped they would hear or receive from you?
Yeah, there was actually.  I had to do a lot of discernment about this, and what came to me is that all of them are facing such different contexts, but one thing that they have in common is that their contexts are changing.  Everybody is facing into a diocese that doesn’t look like any place where we’ve ever done ministry in before, whether they’re in Haiti, or El Camino Real, or Mississippi or Fort Worth, you name it.  Each one is facing into change and trying to hold an entire diocese as we move through that change.

So what I really felt was that I want to help them decrease their anxiety.  And insofar as I, by my very existence as a black woman and as someone who is still fairly young, represent some of that change that’s coming, I want them to know there’s not as much to fear as they might have thought, that these young ones who are coming, as people of color, these women who are coming, whoever it is, we love God, we love Jesus and we love the Anglican way.  What I kept hoping was, God, please help them encounter this experience of difference and to trust that we will hold them with care, and to trust leaders who represent difference back home and be partners with them.  I feel like that happened.

I said at one point:  You know those paddles that doctors have, defibrillators?  Why don’t you get yourselves some and take them back and use them on your diocese, bring some life back to the places where we do our ministries!

They really did become an extended part of my own congregation, and so I want to share something from my journal from the Eucharist at The Crossing the night before I departed for Kanuga:

“All day, I had been nervous about leaving for the House of Bishops, and as worship ended and fellowship began, I told a Crossing member about my anxiety.  He stopped and yelled out, ‘Hey everybody!  Rev. Steph needs the laying on of hands!’  Before I knew it, the scattering body had regathered around me, fanning out like a starburst as people stretched to touch my head and shoulders.  A Pentecostal, black, gay young man who recently joined our community offered up a prayer that set the house on fire, asking God to pour out Spirit-power so that I might witness to the truth, love the bishops into courage and bear the dream of a new church into the halls of power.  I slept like a baby that night.  And, in the morning, I carried my people with me, even as they carried me.”