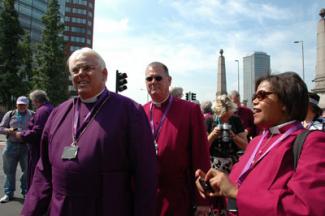 Bishop Gayle Harris marches with other Anglican Communion bishops in the Walk of Witness for the Millenium Development Goals Bishops Tom Shaw, Gayle Harris and Bud Cederholm attended the Lambeth Conference, the once-a-decade meeting of the world's Anglican bishops, July 16-Aug. 3 at the University of Kent in Canterbury, England.

Before the conference began, media attention focused on the fact that Bishop Gene Robinson of New Hampshire had not been invited. His consecration has caused controversy in the Anglican Communion because he is openly gay. However, Robinson traveled to Canterbury and was given permission to be present at two receptions hosted by the Province I bishops to discuss his ministry and election with other Anglican bishops. Dissenting bishops who left the Episcopal Church to affiliate with other Anglican dioceses were also not invited to the conference.

"While it might seem that the conference was only about talking about the Bible and the Anglican Communion, it is the lengthy exchange between bishops that will help bring about unity,” said Shaw. "At times it seemed tiresome to us, and I’m sure to those observing, but eventually, I believe, we’ll come to understand each other."

As Lambeth concluded, there were still differing views over a proposed covenant designed to hold together churches with theological differences and the proposed moratorium on jurisdictional boundary violations as well as blessings of same-sex unions and consecrating partnered gay persons to the episcopate.

Three weeks before the Lambeth Conference, more than 1,100 conservative Anglicans, including some 280 bishops, gathered in Jerusalem at the Global Anglican Future Conference (GAFCON). The group also included former Episcopal priests who have been consecrated in African provinces to serve as missionary bishops in the U.S.

"It is not enough to dismiss the existing structures of the Communion," said Archbishop of Canterbury Rowan Williams in a June 30 statement. "If they are not working effectively, the challenge is to renew them rather than to improvise solutions that may seem to be effective for some in the short term but will continue to create more problems than they solve."

The Lambeth Conference began with an opening Eucharist at Canterbury Cathedral, after three days of retreat. During the conference, the bishops took part in small Bible study groups and larger "indabas," daily listening sessions modeled on a Zulu tradition of community problem solving.

"In my Bible study, several of us admitted to having fears about engaging one another here," wrote Bishop Gayle Harris in one of the dispatches sent to Massachusetts clergy.  "Our diversity of theological interpretations and cultural differences are a blessing and difficulty.  But when we began listening to how and what we fear, together as a group, we discovered, first, that we are more alike than we thought."

On July 24, the bishops and their spouses , as well as ecumenical partners, marched through London in support of the United Nations Millennium Development Goals (MDGs), an event British prime minister Gordon Brown called "one of the greatest demonstrations of faith this great city has ever seen."  Bishop Tom Shaw served as a media briefer for the Episcopal Church and was interviewed by the international press. (Watch video>>)

"To make our voices heard in the public sector on these issues is a way we can be transformational in the world," said Shaw in his dispatch to clergy. "The Gospel demands that of us."

"For me, the march was the most significant moment thus far in the conference, where I felt, as a communion, we were truly 'marching in the Light of God,'" said Bishop Bud Cederholm.

Toward the end of the conference, the bishops spoke at hearings of the Windsor Continuation Group (WCG), which was formed to evaluate the recommendations of the Windsor Report, a study of challenges to unity in the Anglican Communion. "It became apparent that the hearing was not taking us in the direction of unity, but was instead a calling out of the Episcopal Church and the Anglican Church of Canada by some," said Shaw.

"While I don’t think this was the intention for the hearing, it veered in this direction, and because it did, I didn’t feel we were being faithful to the process the archbishop has laid out since the beginning of the conference through our indabas—the lengthy and purposeful discussions between small groups of bishops."

The WCG made a preliminary proposal July 28 to maintain Windsor Report recommendations of bans on same-gender blessings, cross-border interventions and the ordination of gay and lesbian people to the episcopate. No decision will be made on the report before the Anglican Consultative Council meets next May.

"I was surprised at questions about basic theological tenets and whether we really believe them or not, said Presiding Bishop Katharine Jefferts Schori In her post-Lambeth web cast Aug. 7. "It's a reminder that even though we may think all Anglicans believe the basics of the faith, not everybody believes that we believe them."

Read excerpts from the bishops' dispatches>>