The three bishops of the Diocese of Massachusetts are among the 650 Anglican Communion bishops participating in the once-a-decade Lambeth Conference, now underway in Canterbury, England.  The conference runs from July 16-Aug. 3.

This Lambeth Conference is the second for M. Thomas Shaw, SSJE, Bishop of Massachusetts, who attended in 1998, and the first for bishops suffragan Bud Cederholm and Gayle E. Harris.

Shaw took part in a pre-Lambeth hospitality initiative, spending three days as the guest of Bishop Nigel Stock and his wife, Carolyne, in the Diocese of St. Edmundsbury and Ipswich before traveling to Canterbury for the conference’s three-day opening retreat.

He was joined in Ipswich by bishops from Papua New Guinea, Tanzania, South India, South Africa, New Zealand and Canada.  “It was a good way to become accustomed to the international life of the Anglican Communion before coming here to Canterbury,” Shaw wrote in a July 17 e-mail to diocesan clergy.

Before arriving at Canterbury, Gayle Harris preached on July 13 at Bristol Cathedral, the first cathedral in England to hold an ordination of women to the priesthood.

Convened by the archbishop of Canterbury, the Lambeth Conference has been held at 10-year intervals since 1867 (except during times of war), and though it has no binding authority over any of the 38 autonomous provinces of the Anglican Communion, it functions as one of the communion’s “instruments of unity” and provides a forum for the bishops to discuss issues affecting the global family of Anglican churches.

While parliamentary-style debate and resolution making has been a prominent feature of past conferences, the 2008 program includes fewer plenary sessions and more small group work, with emphasis on opportunities for worship, study and personal interaction.

Cederholm commented on the early tone of the meeting in a July 18 e-mail to diocesan clergy:  “The holy rhythm of worship, song, prayer, Bible study, silence and fellowship has set a course and laid a firm foundation for our next two weeks of work together.  I am less anxious about the results of that work and more in tune with relationships that are built and renewed, beginning with our personal relationship with Jesus Christ and our community’s relationship to Christ and with one another.

“Canterbury Cathedral’s mission statement is a few words:  ‘We want to show Jesus to others,’” Cederholm continued.  “That has resonated with my heart as we pray and seek God’s wisdom and compassion to do just that as bishops and as a church.” 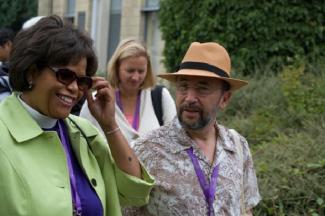 Bishop Gayle Harris departs for the Lambeth Conference retreat with other bishops. The conference begins with three retreat days, July 17-19, at Canterbury Cathedral “in which we can spend time together in quiet and begin to direct our minds toward the central issues of faith,” Williams has said in Episcopal News Service reports.

An official opening Eucharist will be celebrated on July 20.

Because New Hampshire bishop Gene Robinson—who since his 2003 consecration has been a focus of controversy in the Anglican Communion because he is openly gay —was not invited by Williams to participate in the conference, the bishops of neighboring New England dioceses have organized two receptions during the course of the conference so that other Anglican bishops can have a chance to meet him and learn about his ministry.

Shaw, Cederholm and Harris will also participate in a July 24 bishops’ march through London to demonstrate commitment to the Millennium Development Goals that focus on ending extreme global poverty.