The Board of Trustees of the Episcopal Chaplaincy at Harvard has announced the appointment of the Rev. Margery Kennelly, currently the assistant rector at the Church of the Redeemer in Chestnut Hill, as Harvard's next Episcopal chaplain. She will begin her ministry at Harvard on June 1, and will serve a two-year appointment.

“We’re excited to have Margery serve as chaplain at this time,” Chris Kaneb, the chaplaincy’s 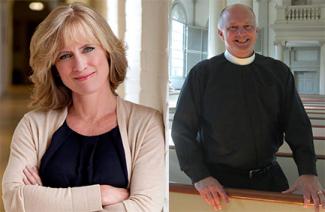 Courtesy Photos The Rev. Margery Kennelly; The Rev. Luther Zeigler board president, said in a prepared announcement.  “She connects meaningfully with students, she is a thoughtful pastor and priest, and she knows the Harvard culture well.”

Kennelly succeeds the Rev. Luther Zeigler, who has been the Episcopal chaplain at Harvard for six years. During that time, Zeigler led the Harvard Chaplains as its president for two years and was the founding chair of the university's new Board of Religious, Spiritual and Ethical Life.

He and his wife, Pat, will be moving to Manchester-by-the-Sea, where he will continue to serve as the vicar of Emmanuel Church, a summer chapel.  He will also be joining the staff of nearby St. John's Church in Beverly Farms as a priest affiliate during the rest of the year. Ziegler also will continue to serve Harvard students in his capacity as a new trustee of the Phillips Brooks House Association, Harvard’s umbrella organization that oversees its community service, outreach and social justice initiatives for its students.

Prior to her ordination, Kennelly was a professional painter, taught drama and music in schools, and directed an acting summer camp. She has also written and directed plays and mimes for liturgical use, and worked in a family shelter. She and her husband, Richard, have two children: Julia, who graduated from the Tisch School and is pursuing an acting career in New York City, and Henry, who is currently in his final year at Harvard College.