PB&F is not a sandwich: A General Convention interview with Mally Lloyd

The Rev. Canon Mally Lloyd is a Diocese of Massachusetts deputy to General Convention and chairs the Committee on Program, Budget and Finance (PB&F), charged with finalizing the Episcopal Church’s three-year budget for General Convention’s approval.  The current draft budget for 2016-2018 is balanced at $120,470,577, increased by about $3 million over the 2013-2015 budget.  About $75 million over the three years is expected as income from the church’s 110 dioceses.

In a recent interview, Lloyd talked about some things that it’s important to know about the budget and why she likes doing that work.

She also serves on the Joint Nominating Committee to Elect the Presiding Bishop, and offered her 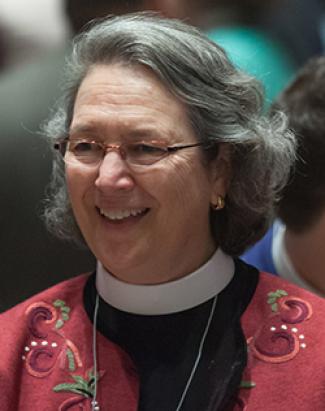 Matthew Cavanaugh The Rev. Canon Mally Lloyd sense of what the church needs in its next presiding bishop, to be elected at the General Convention on June 27 in Salt Lake City.

PB&F sounds like a kind of sandwich.  For those who don’t know, what is PB&F?
Program, Budget and Finance is a standing committee made up of a bishop, a priest or deacon and a lay person from each of the nine provinces and officers of General Convention, ex officio.  The basic function of PB&F at General Convention is to shape the budget that has been handed to it by Executive Council, to hear requests for funding at open hearings and to receive legislation with funding implications and then to put forward a budget for the next triennium.

The two-step process [Executive Council then PB&F] seems a little bit awkward to me,  but some people find it really important to have General Convention put its own eyes on the budget, as opposed to having it go directly from the Executive Council to the convention floor.

One thing that I think is really important is that one of the pieces of our governing documents encourages collaboration between PB&F and Executive Council.  This triennium we had at least one member, if not more, of PB&F at each Executive Council meeting and it really was a collaborative budget process.

What from your perspective is the story that the draft budget for 2016-2018 tells?

The story that it tries to tell is that we are a church about mission, that our focus is on the Five Marks of Mission, that we are outward looking and care about things like formation and the planet and poverty and our Anglican and ecumenical partners.  When we hold that in mind, the stories of each of the ministries in those areas are compelling, and we should be really proud, in a good way, of the work that the Episcopal Church is doing, in some of the toughest mission fields there are.  That bumps up against the need for infrastructure and governance and our polity.  The danger I see is that those two things can become bifurcated.  People can focus on whether too much money is being spent on this or that in terms of administration or staff and lose the connection between that and the stories from the mission field.

An interesting thing for this triennium in terms of the story is that there is a lot of push for restructuring, reimagining the church—and there are pockets in the budget where that’s clearly happening, in terms of some of the larger chunks of money set aside for granting, church planting, for instance, or for work in campus ministries, especially with the historically black colleges—but we had to build this budget with Executive Council based on the canons and the structure as they stand.  Chances are the new structure, if there is one that gets voted by General Convention, will not be reflected in the budget, just because of the timing.  And so, how the story of the restructured church is reflected in the budget is going to be the work of Executive Council in the next triennium, in my opinion.  I don’t see how it can be otherwise.  It will be interesting to see the interplay between the restructuring and the financing of it.

What are the most important things to know about the budget, understanding it’s still a draft?

I’ve told you two of the major things.  One is that it’s really a two-step process and a little awkward at that.  And second is that it’s probably not going to reflect any of the changes that will come through the potential restructuring process.  In this budget we’re continuing a practice that was started in the last triennium of larger chunks of money for new imaginings of how to be church, so for instance, the new mission enterprise zones, where grants were given to new ways of being church.  Last time there was $2 million; in this draft there is $3 million.  It’s been requested that we up that to $5 million, though I don’t know whether that’s possible.

The other thing about this budget that I think the dioceses are going to like is that the diocesan asking is going to be reduced from 19 percent to 15 percent over the triennium, and the credit that’s given before the asking is calculated is going to increase to $170,000, so each diocese is going to save, I think the number is $26,500 over the triennium, to start with, and then the provinces will save an aggregate amount of money.  So that is in direct response to the dioceses and trying to keep some of the resources for ministry in the dioceses.  I think Executive Council and PB&F are excited about that possibility.

And the committee is still taking comments from the wider church?

Yes, until the 21st of June on the www.generalconvention.org site.  I would encourage people to have a look and give feedback.  It’s complicated to try to figure out, but if you look at the bottom lines of some of the sections, you get the idea of the direction it’s going.

Why do you enjoy the work of Program, Budget and Finance?

I love to balance my checkbook.  I was a bookkeeper and office manager for a family business, and I learned accounting at the Dedham High School Continuing Ed. years and years ago.  I like numbers, I like that it’s concrete, that things balance out.  And then if you look into what’s in there, it reflects your values as a family or as an individual, where you spend your money.  I like the play of it.  For example:  I really wish I hadn’t spent quite so much money eating out because I’d really like to have more to give away.  If you translate that up from the individual, it’s really nice to have something concrete and tangible for the parish, or diocese or wider church level, that idea that how you spend your money reflects your values, your theology, your missiology.

I think things like infrastructure, governance, staffing make it possible to do the kinds of mission that we’re called to do.  I really value both, our mission and outreach and how we relate to each other in governance and structure, how we staff ourselves to accomplish ministry and how we encourage and enable and empower people who never imagined they could do this work to do it on the ground.  I think of the Life Together [young adult intern] program in our diocese and the play between developing that and the Young Adult Service Corps at the wider Episcopal Church level and how they’re bringing young people into leadership and into the church.  It’s amazing.

Turning to the election of a new presiding bishop, how long ago did the joint committee begin its work?

It’s interesting that we elect a nominating committee at every General Convention, but it’s usually only every nine years [the length of the presiding bishop’s term] that it actually does any work. So I was elected, as was Bishop Tom Shaw and Dante Tavolaro, from Rhode Island, and then Bishop Drew Smith took Tom’s place when he had to retire from that.  We began with an organizational meeting in the fall of 2012, but it was really in the last 18 months that a lot of the work happened.

What’s the role of the Joint Nominating Committee at the General Convention?

What are some of the attributes that the committee looked for in the nominees for presiding bishop?

I think those come through in about three categories.  One is having a prayerful, evangelical heart and ability to lead and inspire through change, offering people hope and vision through times of change.  Another area is around a collaborative work style, having good personal skills and being able to take good care of personal health and wellness and encourage that in others.  And the third is really grounded experience in nurturing congregations and dioceses, and the ability to juggle roles in a complex structure.  Personally, I think we need somebody who really views administration and organization as a ministry, at least in these next three years, if the church is really going to change its structure in a substantial way.  I think the presiding bishop is going to have to be somebody who can enjoy that piece of the work and roll up his sleeves and really get into it.

I really want to address why there are no women on the slate.  The committee has been asked why no women and why no people from several other categories.  And the answer is that the eligible women and others did not want to run.  It’s partly a reflection of the makeup of the House of Bishops--it’s the tradition that the presiding bishop nominees be diocesan bishops, and right now there are just three women who are diocesans.

That said, I believe we have a solid slate, and each of the nominees brings different, strong gifts.  I look forward to how it unfolds.  I am really fond of all of them, having spent a lot of time with them, and I really want what’s best for each of them and for the church.

What is your hope or prayer for the church in this time?

I would hope we could get rid of the narrative that the church is shrinking.  There are so many examples of strength and hope across the church.  It’s my hope that we reframe the narrative accordingly, for the good of the church, the Gospel and the world.

Learn more about the Diocese of Massachusetts at General Convention here.