"The steadiness of showing up": The Rev. Pamela Werntz's 20 years in prison ministry

For almost 20 years, the Rev. Pam Werntz, Rector of Emmanuel Church in Boston, has been spending her Monday nights in prison.  She is the creator of the art and spirituality program at the Suffolk County House of Correction at South Bay, a volunteer ministry that provides time, space and supplies for incarcerated women to make greeting cards for their family members, or simply to draw and color.

This year, Werntz has taken a step back from running the 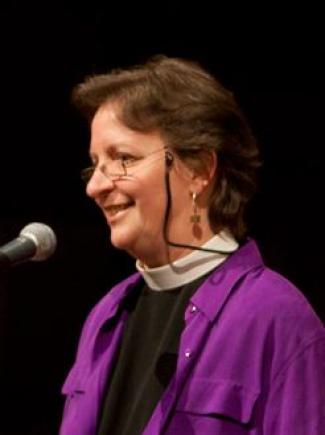 Courtesy Photo The Rev. Pamela Werntz operations of the program, handing over most of the administration to the Rev. Amanda March, parish administrator at Emmanuel and a transitional deacon. Nineteen years after starting the program, Werntz reflected back upon her ministry at South Bay.

“I started the program because most of the women who are incarcerated have minor children, and don’t have a way to communicate with their families that’s meaningful,” Werntz said.  “Many children don’t even know where their mothers are; their mothers are ashamed to tell them. For the children the mothers are just gone. So this is a spiritually supportive setting for women to make cards, to color, to draw, to write letters.”

The sessions begin and end with the volunteers and women from the prison gathered in a circle for prayer. At the beginning of the evening, everyone says her own name, and at the end each woman shares the names of the persons for whom she made a card.

“It’s a way of saying, this is who is on my mind,” Werntz said. “Focusing on the card is a little less intimate than saying, ‘The person who has been on my mind is my two-year-old daughter.’ It already prompts tears, but it’s a little easier to focus on the card than on the person they’re missing.”

“For Pam, naming is very important, that everyone has a name, everyone is important,” said March.

Crucially, the art program serves as a small island of quiet and peace, in a place where those things can be impossible to come by.

“Pam says, ‘Here’s the rule: There’s no questions.’  We don’t ever ask questions of these women,” said March. “You sit at the table and color along with them. If they ask questions you can answer them, but we’re just there to be there with them. [Pam] has really created an atmosphere of a sacred space. They can be who they are and nothing is asked of them.”

This ministry of quiet presence is foundational to the art program. The consistency of showing up, week after week, is itself a statement, Werntz said.

“Another aspect of the impact is the steadiness of showing up, a quiet way of asserting that they matter,” Werntz said. “We communicate their inherent worth, that they’re worth spending time with and that we look forward to seeing them.”

Joy Howard, Werntz’s wife, has been volunteering on Monday nights since 2002. She said that the women in the prison are often shocked to learn that the volunteers are in fact volunteers: not social workers, and not fulfilling a community service requirement.

Howard said that for those who don’t have personal or family experience with the prison system, it’s all too easy to forget the vast numbers of Americans who are incarcerated.

“These people just disappear,” Howard said. “The biggest impact [of the program] is that we go into the prison as witnesses from the outside world and with the presence of our bodies communicate that we know they’re there and that we care about them.”

The population of the South Bay facility is only 2-3 percent women, and the prison frequently has to shuffle people and programs around in order to keep men and women separated. Howard recounted a time in 2002, when women had been restricted to choosing between dinner and their short time outdoors. Those who chose dinner had not been outside in weeks.

“I was talking with a woman and she asked me, ‘What do people think when they hear we haven’t been outside in weeks? What do they say? Doesn’t that upset people?’ and I said, 'Nobody knows,'” Howard said. “I go out and tell people, but for the most part no one has any idea.”

Howard said that people who have the freedom to pass in and out of prison have a responsibility to share what they’ve learned with the wider world.

Werntz first became interested in prison ministry as a seminarian at Episcopal Divinity School, where she completed a year of field experience with City Mission Society, working at South Bay and at Framingham State Prison. When she learned about a grant opportunity for seminarians being offered by the Episcopal Evangelical Educational Society at Virginia Theological Seminary, she decided to write a proposal for an art program at South Bay.  The grants were for parish-based work, so she turned to her fellow parishioners at Christ Church in Cambridge to recruit a small group of volunteers. The project was awarded the small grant in 1998, allowing Werntz to purchase a year’s worth of supplies for the South Bay program.

Werntz recalled the very first night of the program, when she was confronted with the daunting size of the problems facing women in prison. Through her field work, she already knew some of the women who would be coming to the art program, and she was particularly excited to tell one woman named Sheila who had young children she needed to communicate with.

Werntz arrived on the first night, laden with supplies and excited about finally having obtained all the clearances she needed to start, and found Sheila in the lobby, dressed in street clothes.  It was a cold night in late October or early November, dark and cold, but Sheila was wearing the summer clothing she had been wearing when she was arrested.  She told Werntz that she had been released, and didn’t have anywhere to go.

“I suddenly felt the depravity of the whole situation: I have this bag full of markers and colored paper and I can’t give her any money, I don’t have any money, this is terrible, this is ridiculous,” Werntz said. “I felt so ashamed. I thought my little greeting card project was going to save the day and here’s this woman with no coat and no place to go, it’s winter, it’s dark. I just stood there with tears in my eyes.”

Sheila took a tiny greeting card from her belongings, and gave it to Werntz. “Then she put her hands on my head and said ‘God bless you, Pam.’ I just sobbed. She walked out the door and I never saw her again.”

At the end of the first year, the group held a potluck, where Werntz thanked everyone for participating, anticipating that the program had run its natural course.  “Someone said, ‘Does it have to be over?’ And I said, ‘Well, I don’t have any more money,’ and they said, ‘If we raise the money can we keep going?’  And 20 years later we’re still doing it.”

The art program has relied upon grants and individual gifts, year by year, as long as it has existed.  Grants have come from Episcopal Church Women, the Diocese of Massachusetts and many parishes. Werntz especially noted Christ Church in Needham, St. Paul’s Church in Brookline, and Christ Church in Cambridge for their long standing support of the art program at South Bay.

Volunteering in a prison comes with many challenges. Howard said that while many of the corrections officers are professional, others can make the volunteers’ task more difficult. The many regulations of the prison are unevenly enforced.

“This system is designed to keep people off balance, to make them feel unsure of the ground under their feet,” Howard said.

“[The experience] depends on who the program officer is, who’s running the metal detector, who’s the captain on the desk…it all matters,” March said. “I have found as a volunteer you just have to approach it from a place of humility.”

One example of this uneven enforcement came one year around Christmas time, when the women were busily making holiday cards for their loved ones. An officer came to the program room, and demanded to see the clearance Werntz had obtained for the use of six pairs of children’s safety scissors. The authorization had been granted long prior, and Werntz did not have the actual piece of paper showing permission for the scissors.

“Pam said, ‘We have a clearance for them,’ and he said, ‘Not anymore you don’t.’ He had the guards go around and gather up all the scissors,” Howard recalled. “Just this arbitrary exercise of power, which is what the women live with all the time, but it’s so jarring to see as an outsider.”

“That moment was this beautiful testament to you know, God is God, you are not God, you can take my scissors but you can’t take my relationship with God away,” Werntz said. “And so we all just sang, and the ripped pictures got sent.”

“It was such a great example of the fact that you can incarcerate people’s bodies, but not everyone’s spirit can be incarcerated,” Howard said.

Werntz has always come to South Bay as a volunteer, not in any official capacity as a priest, and she does not wear a clerical collar on Monday nights. She says that acting only as a volunteer makes her both more compassionate and more transparent to her parish community.

“I know what it feels like to volunteer every Monday when I have a full-time job, to do this on my own time, on my day off, and that keeps me honest about what I’m asking my parishioners to do on their day off,” she said.

“She has been modeling what the church asks of parishioners all the time, which is for them to donate their time, their talents,” said Howard. “She’s modeling what it means to be a Christian, not just a priest.”

“I’ve learned so much from Pam about her approach to working with people who are marginalized, economically, socially. This project of hers in the women’s prison is very much an extension of who she is at her core,” said March.

For the foreseeable future, Werntz will be a once-a-month volunteer, rather than the program coordinator. Amanda March served as coordinator for the 2016-2017 program year. March will also stay on as a volunteer, although in the future much of the coordination will be taken over by students and faculty from Lesley University’s art expressive therapies program.

Werntz admits that she feels “a little bit untethered” without spending every Monday at South Bay, but that she is thankful that the program has endured for all these years.

“It feels like a little project, but it’s been going on longer than any other program at the prison,” she said. “It’s really been one year at a time, and I have just been amazed at the staying power it’s had and how life giving it’s been for me and the other volunteers.”

And, of course, Werntz will still be there, one Monday a month: showing up and letting incarcerated women know that they matter.

“These problems are so much bigger than a greeting card can fix: poverty and inhumane treatment of people,” Werntz said. “When we have a tough time with the corrections officers, what I encourage the volunteers to do is double down on our commitment to returning the following Monday... . In the end what we can do is to show up. I think that matters, I think God will make something of that. And I don’t need to know how God will make something of that, I just need to keep showing up.”