Cathedral Church of St. Paul undamaged, but community rattled by May 31 protest violence

Civil unrest across the country over the past week in response to police brutality that resulted in the killing of yet another black person, George Floyd in Minneapolis, erupted in Boston over the weekend, with a mostly peaceful protest march involving thousands of people on Sunday taking a violent turn in the evening hours after it had reached the Massachusetts State House—just a block across Boston Common from the Cathedral Church of St. Paul. 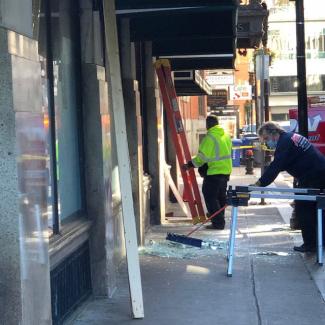 Numerous stores and neighboring restaurants in the cathedral church's Downtown Crossing district had their windows broken and sustained other property damage.  Looting was reported in the area as well.

Though no damage was done to the cathedral church itself, Dean Amy E. McCreath reported in a Monday morning letter that unhoused people in downtown Boston who are part of the cathedral’s MANNA ministry were affected, and that “the psychic damage of having witnessed the violence in the spaces where they have been sleeping rough in a virtually abandoned, locked-down area for two months was clear.  Please pray for all our MANNA staff as they attend to these wounds, for housed and unhoused residents in our neighborhood and for all who, in the days ahead, will struggle to push back the understandable urge to lash out in the face of persistent injustice, white supremacist culture and a president who inflicts more trauma with every tweet.”

Rather than organize an online vigil or issue more statements decrying racism, McCreath said she was instead inviting the diocesan community “to build relationships and engage our world by uniting with one another, creatively and urgently”—and offered several suggestions, including “planning joint Zoom worship services that bring together parishes across racial and cultural differences; donating to the Massachusetts Council of Churches One Church Fund, which is providing support for immigrant, black, poor, unhoused and unaffiliated churches; using deanery assemblies to learn more about the particularity of systemic racism and its impact in your area and to discuss how to work together to address it” and “something else I could never have imagined but that the Spirit is revealing to  you.  Pray.  Listen deeply. And respond.

“May the Holy Spirit convict us of our sins, stir us to repentance and action, embolden us to speak truth to power and unite us for Love’s sake.”