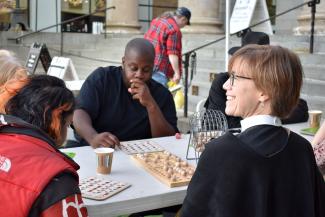 Bridget K. Wood Cathedral dean, Amy McCreath (right), plays Bingo outside of the Cathedral Church of St. Paul as part of the "Ministry of the Steps."

A police officer and a person who is homeless playing chess together isn’t something you would necessarily expect to see while walking down Tremont Street in downtown Boston. On the portico of the Cathedral Church of St. Paul, however, this has become the new normal during the summer months thanks to the cathedral’s “Ministry of the Steps.”

The Ministry of the Steps officially launched as a pilot program last summer, with just a tent canopy and some AstroTurf from Costco, and an invitation to others to join cathedral staff and volunteers in offering various outdoor activities in order to engage the community and those walking by.

The activities range from chess, checkers and Bingo games to art projects, drum circles, musical performances and chanting. Last year’s Ministry of the Steps included voter registration drives as well as a witness against gun violence by the B-PEACE for Jorge Campaign. The Ministry of the Steps has now begun its second summer of programming with activities happening outside the cathedral on Tuesdays, Wednesdays and Thursdays beginning at 9 a.m.

Eva Ortez serves as a Life Together fellow for the MANNA ministry at the cathedral, a ministry of and with the homeless community in downtown Boston. Ortez experienced a powerful moment during a recent day of chess and checkers under the Ministry of the Steps canopy. 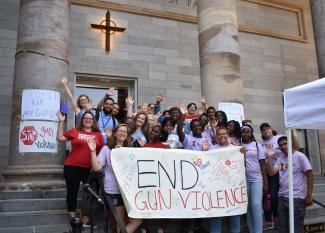 Tracy J. Sukraw The B-PEACE for Jorge campaign made a witness against gun violence on the steps of the cathedral last summer in 2018.

"I took a step back and just wanted to take it all in, and in that moment I noticed the amount of joy everyone there was experiencing.  The group of people there was so diverse. There was a cop and an unhoused person playing, a young student and a recently housed person playing, and in the background there was a group of MANNA community members playing music, singing and dancing,” Ortez said. “Watching all of this and being part of something so beautiful almost brought tears to my eyes.”

While the Ministry of the Steps is still new, it’s in keeping with the intent behind the decision to make St. Paul’s Church in downtown Boston the cathedral church of the Episcopal Diocese of Massachusetts in 1912, according to the cathedral's dean, the Very Rev. Amy E. McCreath.

“Bishop Lawrence chose St. Paul’s Church as the location for the cathedral of the diocese very much intentionally, wanting it to be in a place that was in the downtown area, where people from lots of different backgrounds were coming through,” McCreath explained in an interview. “Being on Boston Common is just perfect for that.”

“Jesus encountered people in the marketplace, on the road and over meals, and a lot of Jesus’ style was to do something familiar but in a different way,” McCreath said. “People know about chess, they know about voter registration drives, they know about labyrinths, but they’re not expecting all of that to be kind of on the sidewalk and presented by somebody in a [clerical] collar, so it shakes things up a bit.”

McCreath said that one of her favorite parts of the Ministry of the Steps is seeing people who are walking by stop and notice what is going on outside of the cathedral, even if just for a brief moment.

“There’s this kind of attention that may not translate into that person ever coming into the church, but they’re aware of it and they have a positive encounter,” McCreath said. “Part of what we are doing through the Ministry of the Steps is reclaiming all of that space in front of the cathedral for good, in a neighborhood where the steps are not always used for good.”

During a presentation about the Ministry of the Steps at the diocesan Ministry Network Showcase last fall, the Rev. Jennifer McCracken, who serves as head pastor to the cathedral’s MANNA community, described it as a new ministry through recreation. “Or better still, re-creation,“ McCracken said. “Re-creating a sacred space outside for people to come and be welcomed to engage in community.” 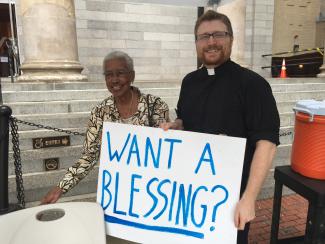 “Following Jesus into the neighborhood of chaos is always risky because it asks us to confront our fears and our doubts and our risk of failure,” McCracken said. “It also asks us to let go of our fenced-in spaces that confine us to smaller areas, and to move out into the world.”

As part of the Ministry of the Steps, clergy will often stand outside on the sidewalk with a sign asking, “Do you want a blessing?”

McCreath said that this allows people to receive a blessing without having to climb the steps of the cathedral and go inside the church.

“Those front steps are very intimidating--what we call a high threshold to entry--so by coming down the steps, that just eliminates that barrier,” McCreath said.

Kevin Neil serves on the MANNA pastoral team, and helped to facilitate chess and checkers games as part of the Ministry of the Steps. Neil explained in an interview that this ministry allows the cathedral to interact with different groups of people than those who might walk up the steps and through the doors.

“The concept of extending the welcome and the culture of hospitality, which we work really hard in the cathedral to cultivate on Sunday mornings and throughout the week in the building, are harder to extend beyond the building,” Neil said. “I think this is really helpful in making that possible and making it seem possible to folks actually outside on the sidewalk or across the street.”

Libby Gatti serves as the chaplain to the MANNA community, and said in an interview that one thing that makes this ministry unique is that people of all backgrounds are coming together on equal ground.

“If you’re an unhoused person and you are coming to play chess or checkers...it’s not a transactional thing, it’s not like someone giving you money or handing you a plate of food,” Gatti said. “You’re two players playing a game together, so this is a little bit of a chance for deeper connection and for coming together on equal ground.” 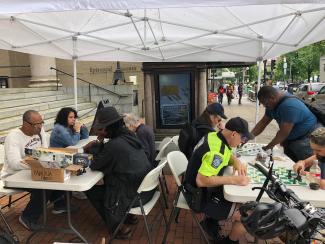 Courtesy Photo A Boston police officer and other community members play chess outside of the cathedral last summer in 2018.

Andrew Fortes works downtown in the finance industry. An avid chess player, he noticed the chess games happening outside of the cathedral last summer and began to join in on his lunch breaks. Through these weekly chess games, Fortes built relationships with members of the MANNA community, and when the Ministry of the Steps came to an end with the fall weather, Fortes was invited to attend the Monday lunch program that MANNA hosts at the cathedral--a place where anyone can come and get a hot lunch on Mondays. Fortes began attending the lunches, and subsequently began volunteering to help serve.

In an interview, Fortes said that he keeps coming back to the Monday lunches not only because he feels like he is contributing to society and it brings him a sense of goodwill, but also because he gains wisdom from those he meets and has conversations with.

“Just meeting people from different backgrounds really opens your eyes, and creates a level of openness in your mind,” Fortes said. “At the end of the day, everybody’s experience of life is different, and anybody that you can talk to can offer you some wisdom. Going to the Monday lunches, I always find myself gaining some type of wisdom.”

Sargent said that the goal of the Ministry of the Steps is to be a bridge between the cathedral church and the outside world and let people know that they are welcome.

“It’s just extending a welcome, which sometimes looks religious and sometimes it doesn't,” Sargent said. “We are multidimensional humans and the way faith is expressed is multifaceted, and so, bringing people’s passions into the space is just as much about religion as blessings are.”

Sargent said that one of her goals with this ministry is to get more people involved from across the diocese, emphasizing that it is people’s individual passions and gifts that make a difference and inviting all to come and participate. 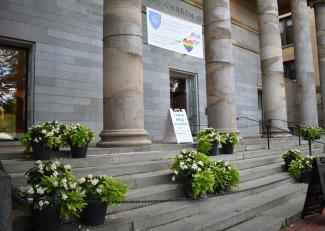 Bridget K. Wood The steps leading up to the Cathedral Church of St. Paul in Boston were decorated this June with flowers by the Downtown Boston Business Improvement District (BID).

“Come for an hour, come for two hours, bring your talent, bring your passions, bring your joy, and let’s see what we can do,” Sargent said. “Something can only be gained by stepping into something a little uncomfortable or a little new.”

Cathedral dean Amy McCreath encourages congregations of all sizes and locations to try something new in order to engage the world around them.

“Not every church is in a location like this where they can just open their front doors and start doing a drum circle,” McCreath said. “But I think there’s something to be learned from it about just trying something out as a pilot project, that it doesn’t need to cost a lot of money, there’s always something to learn and that people are more ready to be engaged than we often think they are.”

In addition to the Ministry of the Steps activities this summer, the cathedral’s music director, Louise Mundinger, will be leading “Introduction to Sung Evensong” on Wednesdays from 4 to 6 p.m. No experience is necessary and all are encouraged to come and sing Evensong as an individual or with a group. On Thursdays from 12 to 5 p.m., all are invited to come and learn about labyrinths and walk the labyrinth inside the cathedral.

For more information about the Ministry of the Steps, or to get involved, contact Karen Sargent at cathedralsteps@diomass.org.