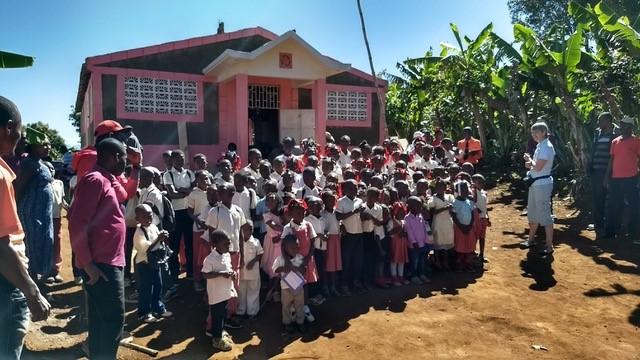 Future Forward for Haiti, Inc. School children in St. Louis d'Ayiti, the community with which Christ Church of Hamilton and Wenham has recently partnered.

At this moment in Haiti, schools and businesses are closed down as protesters block the streets, demanding the resignation of their president, Jovenel Moïse, amid fuel and food shortages, and charges of corruption. The anti-government protests have been growing since mid-2018, and the unrest and instability in a country that is among the world's poorest has had a stifling impact on the work of many nonprofit and church partners, including those in the Diocese of Massachusetts.

The Rev. Rospignac Ambroise serves as priest-in-charge of St. John St. James Church in Roxbury and as an associate priest at Grace Church in Everett, a mostly Haitian congregation. Ambroise explained in an interview how the mismanagement of money by the Haitian government, which has led to the massive protests and discontent, is now negatively affecting innocents in Haiti.

“It’s very unfortunate because without the support of the partners, there’s no way kids can go to school and get food,” Ambroise said. “It’s unfortunate when we know that partners can’t travel to go to Haiti to bring with them medicine, pencils and notebooks for kids this time of the year.” 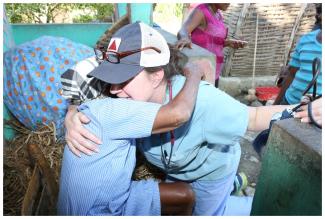 Courtesy Photo A nurse from St. Paul's in Bedford greets a patient she knew from a prior year at a mobile medical clinic in Haiti.

The Rev. Holly Hartman, a deacon who serves as missioner for global mission, has been to Haiti two or three times a year since 2006 and explained in an interview that this is the first year that trips have been postponed or cancelled this long.

“It’s been an unusually really difficult year," Hartman said. “Usually with the partnerships, people are coming and going fairly easily, but it really is affecting people’s ability to visit and to continue whatever they are working on together.”

Hartman spoke about how her experiences in Haiti and with the Haitian people.

“People say Haiti is the poorest country in the Western Hemisphere but that’s only economically. It’s not poor in spirit at all," Hartman said. “And that’s why I think Americans like to go, because you just have this incredible experience with the Haitian people.”

Christine Anderson, a parishioner at St. Paul’s Church in Bedford, first became involved in Haiti in 2014 when the Parish of the Epiphany in Winchester invited people from St. Paul’s Church to join them on a medical mission trip. A nurse practitioner, Anderson went to Haiti to spend a week doing mobile medical clinics and providing much-needed healthcare to the Haitian people.

After that first trip, St. Paul’s began its own Haiti mission and formed partnerships with multiple organizations in the Leagone area, providing both financial support through fundraising and diocesan grants, as well as various mission trips.

One of its partners is the first four-year baccalaureate school of nursing in Haiti, FSIL or La Faculté des Sciences Infirmières de l'Université Épisco-pale d'Haïti (Faculty of Nursing Science of the Episcopal University of Haiti). 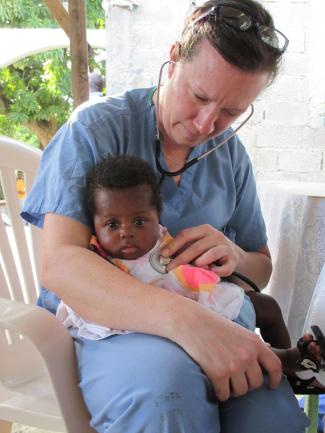 Courtesy Photo Michelle Gillig, a nurse and member of St. Paul's in Bedford, treats a baby in Haiti at a mobile medical clinic.

Another is a newly formed rehabilitation school for physical and occupational therapy, FSRL or La Faculté des Sciences de Réhabilitation de Lé-ogâne (Faculty of Rehabilitation Science of Leogone), located on the same campus as the nursing school. In addition to these two schools, through the Children’s Nutrition Program of Haiti, St. Paul’s has sponsored a monitrice, a Haitian who is hired to provide education and intervention to families with children at risk of nutritional problems.

Due to the current civil unrest and protests, St. Paul’s had to cancel its mission trip to Haiti for this year, but still sent financial support to its partners, and Anderson was able to make a trip to FSIL this past February as part of a group of health care providers who spent time performing health assessments for the students and some staff at the nursing school.

The schools that St. Paul’s partners with told Anderson how, due to the protests and fuel shortages, they have been unable to send their students to clinicals. The group Anderson was traveling with stayed at a hotel near the airport in Port au Prince the night before its flight to avoid having to travel in the dark. Getting to the hotel, Anderson could see burning tires and had protesters stop the group's vehicle.  While sitting outside by the pool at the hotel that night, she heard gunfire and quickly retreated indoors.

“It’s so hard to plan, and you really have to plan far ahead,” Anderson said. “You don’t want to plan a trip that gets canceled and you don’t want to go and then get stuck.”

Huntley Skinner is a parishioner at Christ Church in South Hamilton, which, in 2017, started working with an organization called Future Forward for Haiti, based in Teaneck, N.J., to build a relationship with the community of Saint Louis d’Ayiti, in the eastern mountainous region of Haiti. This relationship has been made possible through the Haitian Light and Peace Mission in Bon Repos, Port-au-Prince.

A group of Christ Church parishioners was preparing to take its first trip to meet partners in Haiti this spring, but had to cancel the trip due to the current unrest. Skinner is in contact with several of the parish's Haitian partners and asked if things were safer in their community than in Port au Prince.

“[Our partners] said it is safer, but the unrest or the discontent is permeating the whole country no matter where you are,” Skinner said. “So even though, up in the mountains life might be less interfered with than it is in the urban areas, there’s this underlying sense of unrest that just permeates the whole country at this point.”

Although the Christ Church team was unable to travel, their duffle bags full of supplies are packed and ready to go for next year, and in the meantime, they are hosting a “Packathon” through Future Forward for Haiti and Feed the Hunger, to pack meals to be sent down to the Light and Peace School in St. Louis d'Ayiti. They are looking for 400 volunteers to come pack meals in an assembly line fashion, as well as for donations to help cover the cost of the food and shipping to Haiti.

“There’s a global hunger issue and this is a way we can locally put hands on it and help in a small way rather than throwing our hands up and saying there’s nothing we can do,” Skinner said. “If we can make a difference, then I feel like we’re walking in the feet of Christ.  That’s what we’re supposed to do, you know? That’s what the church is about.”

To register for the North Shore Packathon click here.

To get connected to others in the diocese with Haitian mission partners, or for information about beginning a partnership, contact the Rev. Holly Hartman at hhartman@diomass.org.

Congregations and communities in the Diocese of Massachusetts involved in Haiti mission relationships include: