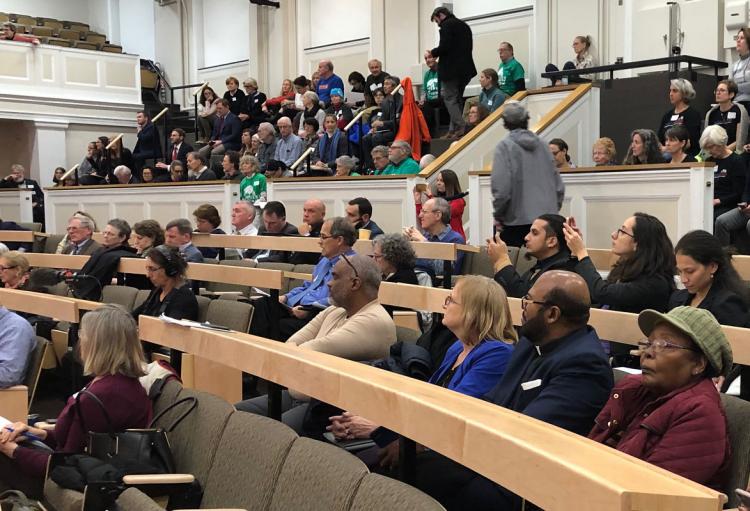 Courtesy Photo Members of the interfaith team attend a public hearing at the Massachusetts State House this past November to testify about their experiences during and after the gas crisis.

On Sept. 13, 2018, explosions and fires caused by the over-pressurization of natural gas lines forced the emergency evacuations of thousands of people in three Merrimack Valley communities, affecting an estimated 10,000 households.

For many in the 17 months since, the crisis may have faded from memory, but for people in the affected communities--including three Episcopal churches and one Episcopal school, Christ Church in Andover, St. Paul's Church in North Andover and Grace Church and Esperanza Academy in Lawrence--the work of restoration is ongoing and interfaith leaders continue to speak out about the need for equal access and the responsibility to care for creation and do things in a more sustainable and safe way. 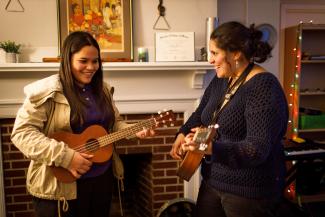 Courtesy Photo Some of the diocesan funds raised to aid in the disaster relief were used to fund the salary of a music therapist at Esperanza Academy in Lawrence. The music therapist Cynthia Koskela (right) is shown playing music with Esperanza student Adriani Espinal (left).

In the immediate aftermath of the disaster, Bishop Alan M. Gates and Bishop Gayle E. Harris appealed to all congregations in the diocese to collect an offering for a Merrimack Valley relief response, raising a total of $48,739. An initial allocation went to Grace Church in Lawrence ($15,000) and Christ Church in Andover ($4,500) for immediate needs such as food, hotel stays, rent, medicines and, in one case, funeral expenses.  A grant of $12,500 from the Boston Episcopal Charitable Society also went to Grace Church to assist community members with basic needs.

Another $20,000 funded the salary of a music therapist at Esperanza Academy to help the middle school students of the tuition-free school heal after experiencing trauma from the disaster.

“It was clear that our students were carrying a heavy weight with them for months,” Esperanza's head of school, Jadihel Taveras, said in an e-mail. “Every week, more than half of our students are meeting with the music therapist one-on-one or as part of a small group. We still provide access to traditional therapeutic services, but music therapy can be more accessible to our girls because music is so important culturally and to that age group. Through lyrics or with instruments, they are expressing themselves in a safe and familiar way and they learn that as they carry music with them they can use it as a coping mechanism or as a way to better understand and process trauma and conflict.” 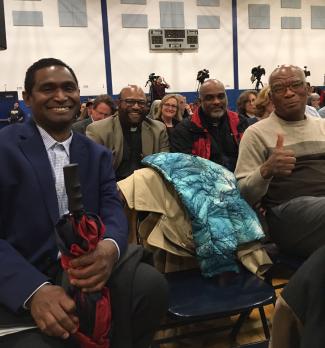 Now, the $7,739 remainder of the diocesan response funds are being used by Grace Church specifically to help the interfaith team that formed in the wake of the disaster to do outreach into the wider community about available programs.

The Rev. Joel Almono, the rector of Grace Church, explained in an e-mail how that interfaith team formed when local religious leaders from a variety of denominations--including Episcopal, Lutheran, Evangelical, Jewish, Unitarian, UCC, Seventh Day Adventist and Roman Catholic--recognized a common need in their congregations and joined forces to try and arrive at solutions that would benefit their congregations as well as the larger communities.

“We all began to work together--the pastors from Lawrence, as well as those from Andover and North Andover--to develop a plan to assist the community,” Almono said. “We did this because we understand Jesus’ Gospel to be one of renovation, but also transformation--in this case transformation of the social structures that were impacting the most vulnerable in our community."

Susan Almono, Joel’s spouse, serves as a leader on the interfaith team and explained in an interview how the disaster was a wake-up call for many in their communities about potential dangers of natural gas and the need to care for creation.

“After the disaster we felt like, of course we needed to address people’s spiritual needs and material needs, but further than that, we felt like it was a moment when we should seize this reality and do better as we rebuild our system,” Almono said. “I think that it’s just so important that our faith communities get together in this way and see that God’s creation is for us to take care of--and isn’t that what Jesus would have us do? That’s what he was about, love and loving all of God’s creation. I think that that's the basic message that we’ve been working on. And also, that we love everyone equally, which means, let’s make sure that the same resources and opportunities are available to everyone.”

As the recovery process got underway, it became clear to Almono that the same resources and opportunities were in fact not available to everyone, and the many Spanish-speaking residents of Lawrence in particular were at a disadvantage.  The interfaith team began working with city and state representatives as well as Columbia Gas representatives to request energy-efficient appliances for households in need of new equipment and to request that Spanish-language translators accompany household assessment teams. 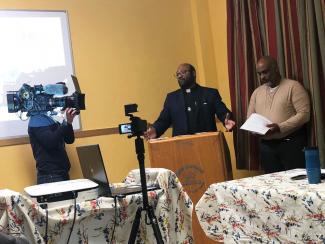 Courtesy Photo The Rev. Joel Almono (at podium) speaks at a bilingual press conference held by the interfaith team on Nov. 12, 2019, to try and get word out into the community about the request for an extension of the no-cost MassSave program available to communities affected by the disaster.

According to Almono, the process to take advantage of the MassSave energy-efficiency program is very complicated and, unless you are a homeowner who speaks English, it can be difficult to manage, so with the support of diocesan relief funds, the interfaith team and its nonprofit partners are providing bilingual door-to-door soliciting of homeowners to help them understand what programs are available to them, what their rights are and what help is available for home heating and insulation.

As part of its disaster recovery response, Columbia Gas has been offering limited-time no-cost energy efficiency upgrades through the MassSave program to households in Lawrence, Andover and North Andover. The interfaith team most recently worked with the state’s Energy Efficiency Advisory Council and Department of Public Utilities to get an extension of the program for an additional year, citing poor community outreach on the part of Columbia Gas to let people know about the offer and help walk people through the process.

After meeting with Columbia Gas representatives as well as legislative representatives, including senators Elizabeth Warren and Edward Markey, the interfaith team sent a letter this past November to Columbia Gas asking for the extension, prompting similar letter from Warren and Markey. The interfaith team also held a bilingual press conference on Nov. 12, 2019, to try and get word out into the community about the request they were making and why. That same day, a delegation from the interfaith team attended a public hearing at the State House to testify about their experiences during and since the gas disaster, and to express frustration on how the recovery has progressed. 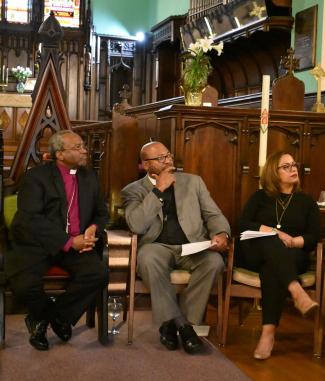 Bridget K. Wood At Grace Church, Lawrence: Presiding Bishop Michael Curry, with the Rev. Joel Almono and Sadia Jiminian of Grace Church, listens to stories of those affected by the gas disaster.

Last April, Episcopal Church Presiding Bishop Michael B. Curry spent a weekend in the Diocese of Massachusetts, and made a pastoral visit to Grace Church on April 26 to hear from Merrimack Valley church and community members affected by the disaster.

“One thing we can do is spread the news,” Curry said to those gathered, referring to the work that church people can do. “Church can't do everything, and it's not good at doing everything. But it is good at some things!  Church folk are still around when the news cameras are gone. We hang in for the long haul, and one way we hang in for the long haul is to continue to tell the story.”

The Rev. Canon Martha Hubbard, the regional canon for the Northern and Western Region of the diocese, attended that gathering, as well as various meetings, hearings and press conferences with the interfaith team since the disaster.

“I think at the heart of who we are as Christians, of course, is taking care of each other and our communities.  It’s seeking justice for people who are in need or have been in some way wronged, and the larger society is not really paying attention,” Hubbard said in an interview. “I think a tragedy like this uncovers some of that.  It shows that usually the people at the epicenter of this kind of structural tragedy are the poor and those who are in some way on the margins, so I think it’s really important for us to be there.”

Hubbard said that, despite the many challenges that these communities have faced and continue to face in the aftermath of the disaster, she has found a bigger story of community and faith that inspires.

“I was overwhelmed by how our community responded and just so proud to be part of that community…just the outpouring of generosity from every corner of our diocese to the people there,” Hubbard said. “A trauma like this allows us to come in and say, ‘There’s a bigger story of God’s salvation and grace here, and let’s try to find what God can help us do in a good way from this point.’ That’s really important.  Making positive meaning out of a situation like this is part of what we do, it’s part of our faith.  It’s death and resurrection.”

For more information about the interfaith team in the Merrimack Valley, contact Susan Almono at susanalmono2@gmail.com.

Read the 2018 Episcopal News Service story about the disaster here.