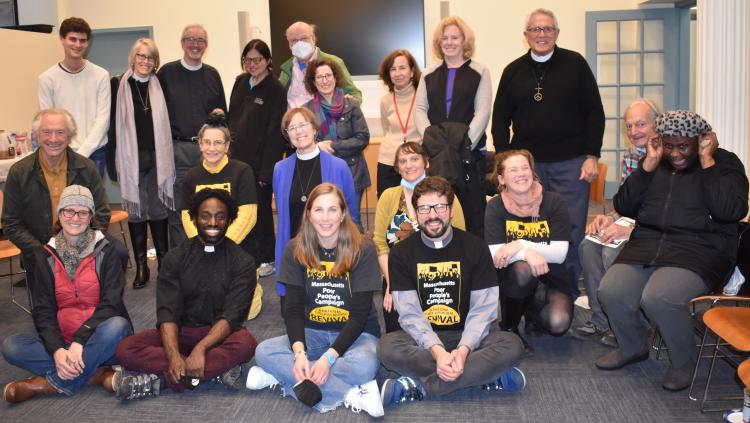 Tracy J. Sukraw The Massachusetts Episcopal Network for the Poor People's Campaign gathered a group at the Cathedral Church of St. Paul for reflection and conversation ahead of the Jan. 13 unveiling of "The Embrace" on Boston Common. The Poor People's Campaign takes up unfinished work initiated by the Rev. Dr. Martin Luther King Jr., and Episcopalians in the Diocese of Massachusetts are invited to join the movement, however they are able.

Tracy J. Sukraw "The Embrace": Construction fences and security barriers prevented people from getting close to the new King memorial as it was unveiled on Jan. 13, but crowds braved rainy weather nonetheless to watch the ceremony on video screens set up around the perimeter.

Each person in a circle of about two dozen gathered at the Cathedral Church of St. Paul in Boston offered a word that was on their heart or mind as they prepared to walk across Tremont Street to the Boston Common on Friday, Jan. 13 for the unveiling of "The Embrace"--the new 22-foot-high bronze sculpture designed by Hank Willis Thomas to commemorate the legacies of Dr. Martin Luther King Jr. and Coretta Scott King and the civil rights leaders who worked alongside them in Boston. (Listen to an interview with the artist on WBUR's "Here and Now" here.)

The cathedral gathering was convened by the Massachusetts Episcopal Network for the Poor People's Campaign which has been organizing Episcopalians in both Massachusetts dioceses over the past year to get involved with the national campaign and its Massachusetts chapter.

The Poor People's Campaign is a coalition movement that is about taking up the unfinished work that Martin Luther King Jr. and others initiated in 1968 when they called for a "revolution of values" and a movement to unite poor people and their communities.  The revived campaign, with the national leadership of the Rev. Dr. Liz Theoharis, the Rev. Dr. William J. Barber II and others, seeks to address interwoven issues of systemic racism, poverty, ecological devastation, militarism and religious nationalism.

"It seemed like a natural moment for us to gather beforehand, both our diocesan network and with the Poor People's Campaign Massachusetts Chapter, for some fellowship and conversation before we all head over together," the Rev. Paul Shoaf Kozak said in an interview before the gathering.  He is a network organizer and the associate pastor for MANNA, the cathedral church's ministry with the homeless community in downtown Boston.  "The efforts of the Poor People's Campaign fit squarely within our Baptismal Covenant, within resolutions that have been passed within the church, within broader theological ideas that have been present in The Episcopal Church for decades, if not centuries. The campaign is an amalgam of all of that, and people are invited to participate," he said.

Fellow organizer Amelia Slawsby of St. Dunstan's Church in Dover said that a hope for the Massachusetts Episcopal Network for the Poor People's Campaign is that it can be a convener of those already doing work to fight the evils the campaign is trying to confront.

Last October, the Diocesan Convention adopted a resolution calling on congregations and individuals in the diocese to learn about and participate in the campaign. 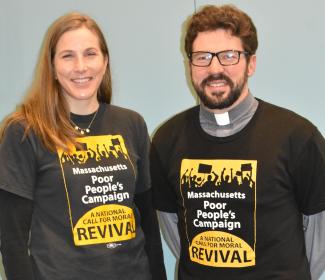 Tracy J. Sukraw Amelia Slawsby and the Rev. Paul Shoaf Kozak invite others to join them in the Massachusetts Episcopal Network for the Poor People's Campaign. A drop-in Bible study group meets on Zoom on Wednesdays at 9 a.m.

"One of the great things about the campaign is it's not about making more structures; it's taking people who are doing work and fighting these fights and bringing them together to have power and unity and one big voice," she said.  "We do a lot of good justice work in our diocese and I think that's so important to name.  But one of the things the campaign points out is that these injustices are all connected. You can't fight for health care without addressing racism and poverty. You can't talk about ecological devastation without addressing racism and poverty. And so we have to look at the big picture, and if we can get folks working together, we'll be more successful in that fight," she said.

Working with Episcopal City Mission (ECM) and its statewide campaign on shrinking the racial wealth gap is one example, she said.  ECM is offering an online informational session on its campaign on Wednesday, Jan. 25 at 6 p.m.  Those who can't attend are welcome to register anyway so that they can receive a recording of the session.

The network also offers a weekly online Bible study on Wednesdays at 9 a.m., using We Cry Justice: Reading the Bible with the Poor People's Campaign (Bible study Zoom link here).  All are welcome, and anyone can drop in during a given week as they are able.  Shoaf Kozak, who leads the Bible study, said they are considering adding another date and time to expand the opportunity.

"You really can jump in as you feel called and able," Slawsby said.  "And that's a great thing about the campaign, too.  There's space for you, whatever you feel called to give and do. You're welcome and there's room for you."