Imagine having to walk nine hours to the doctor’s office while sick, or bringing your toddler to work where they have to sit in a smoke-filled kitchen for eight to 10 hours a day. Imagine being a young student living at a boarding school where the bathing facilities are a bucket of cold water and a cup. This was a reality that is no longer the case for many people in the Anglican Diocese of Tanga in Tanzania--thanks to a partnership with several congregations in the Episcopal Diocese of Massachusetts. 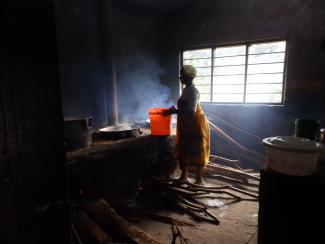 This partnership began with a visit to Tanga in 2006 by the late bishop of Massachusetts, the Rt. Rev. M. Thomas Shaw, SSJE, the primary goal being to build relationships between the two communities. The Diocese of Massachusetts first raised funds to build a health center, a new parish church and rectory, solar power installations and water conservation projects, as well as the Bishop Tom Shaw Early Education Center.

In addition to these projects, a main focus of the current relationship is the Hegongo Holy Cross Secondary School (HHCSS)--an Anglican mission school in the small village of Magila. Thanks to a United Thank Offering (UTO) grant in 2016 and another awarded in August 2018, for almost $67,000, this school has been able to grow and give the students there a better quality of life and learning.

The United Thank Offering is a ministry of the Episcopal Church which awards grants for projects that address human needs and help alleviate poverty, both domestically and internationally. The most recent grant is being used for the creation of a kitchen and dining area at the HHCSS so that it can expand enrollment and add two grade levels. The 2016 grant of $33,240.87 was used to give the girls at the HHCSS proper bathrooms with plumbing and showers, improve the girls dormitory and build an incineration system to replace the old method of just burning trash behind the girls dorm, according to a report by the Rev. Maryalice Sullivan who has been involved in this partnership for many years. 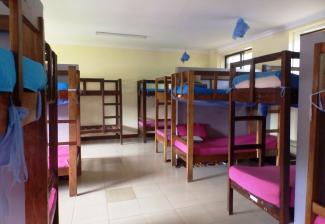 Sullivan is the retired rector of Grace Church in North Attleborough, and since moving to Rhode Island, she has gotten several parishes there involved in this partnership as well. Sullivan says that the people of Tanga have much to teach about resilience and resourcefulness.

“It’s a wonder life can go on and exist and yet it does and they find a way to find joy wherever they can find joy...I don’t have words to describe the resilience of the people...they have gifts to give us that we don’t even know,” Sullivan explained in an interview.

According to the 2018 grant application, enrollment at the HHCSS grew 10 percent after the UTO-funded girls dormitory was completed; the hope is that with this 2018 grant they can continue to grow the school and provide a better learning environment for students.

Parishes involved in the partnership include Grace Church in North Attleborough, All Saints Parish in Brookline, Trinity Church in Melrose and St. Andrew’s Church in New Bedford. Those involved would like this relationship to continue and have expressed a desire to have teachers from Tanga visit the U.S. The Rev. Rebecca Blair, Rector of St. Andrew’s in New Bedford, got her parish involved when Sullivan, her friend of many years, reached out to expand the project.  What surprised Blair most about this partnership are the similarities between the problems of school children at HHCSS and children in an afterschool program run at St. Andrew’s.  She noted in an interview that although there is a huge difference in resources, the two have the same issues, such as children who need more learning help than others and are confronted with standardized tests that they cannot pass. “Those are things that we address in our program all the time and to see exactly the same kinds of problems halfway across the world is really quite startling,” Blair said. 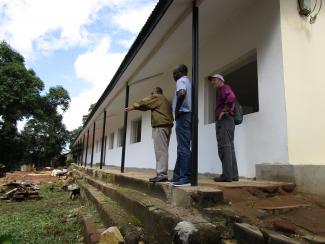 Participants in this partnership agree that the lives of both communities--in Tanga and in Massachusetts--are enriched through the relationships they are building. Sister Sarah Randall, SSM of the Society of St. Margaret in Duxbury became involved in the partnership after joining Bishop Alan M.Gates on a trip to the Diocese of Tanga in June of 2017.

Randall was recently named coordinator and sees the partnership as a joyful opportunity that gives a gift to those involved:  “The gift of knowing people--to learn from them, and walk with them and realize in a different way how we are in fact the body of Christ and we are united whether or not we realize it," she said, "and how much richer is our life in Christ together if we’re aware of the gift we have in each other and we can support each other in our faith and our walk? It’s a powerful thing when you realize there’s so much difference but yet there’s only one Jesus.”

To read more about this partnership with the Diocese of Tanga visit the Friends of Tanga blog: http://friendsoftanga.blogspot.com/