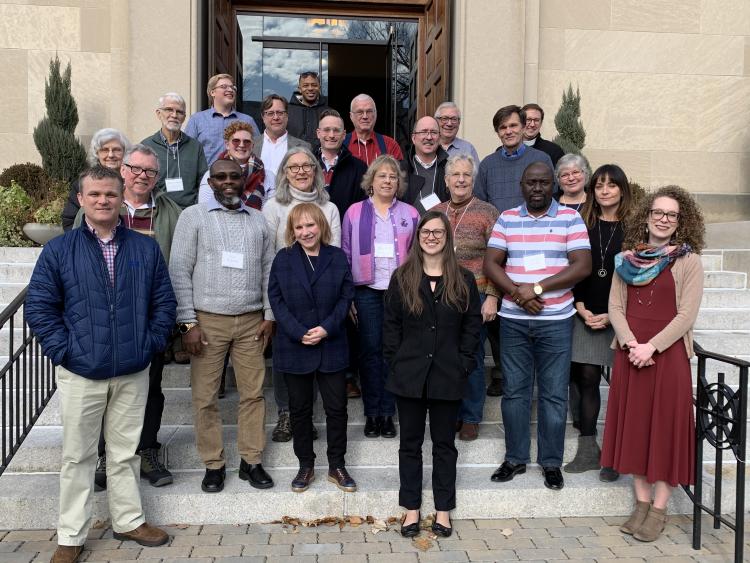 Courtesy Photo Nineteen people from five New England dioceses traveled to Washington, D.C., Dec. 4-5, 2019, for advocacy training and meetings with legislators about refugee and immigration policy reform.  They are pictured here with staff members from Episcopal Migration Ministries and the Episcopal Church's Office of Government Relations.

A New England contingent of 19 people from the Episcopal dioceses of Massachusetts, Vermont, Rhode Island, New Hampshire and Maine traveled to Washington, D.C., in December for "Love God, Love Neighbor: Advocacy in Action"--a two-day training and advocacy initiative focused on how to engage with lawmakers about refugee and immigration policy reform.

Staff members from Episcopal Migration Ministries and the Episcopal Church's Office of Government Relations provided the group with a day of advocacy training to prepare them for meetings with their senators, representatives and congressional staff the following day.

Worthwhile takeaways from the experience, several participants said upon their return, were the opportunity to learn and practice advocacy skills and to build relationships—among Episcopalians in the region, with new partners in churchwide organizations and with lawmakers and their staff.

The Episcopal Church has for decades advocated U.S. policies that offer a pathway to legalization for undocumented people in the U.S. and that support humane enforcement and prioritize family unity.  The advocates from New England learned more about policy and pending court and legislative action in a variety of areas, including Temporary Protected Status (TPS), Deferred Action for Childhood Arrivals (DACA) and matters of due process and detention at the U.S. border, in addition to issues related to refugee admissions and resettlement.

One Diocese of Massachusetts participant, the Rev. Joseph Mumita, Priest-in-Charge at Grace Church in Everett, said the trip was, for him, "an eye opener."

"The event was educational and was an eye opener to understand what the current administration is doing behind the scenes to effect very stringent and damaging measures to deal with immigration and immigrants who are here, and those who for whatever reason would want to come here on any ground," whether that be to seek asylum or medical care or for any number of other worthy reasons, he said by e-mail.

"It was important to show the team working for the Episcopal Church office of advocacy that they are not alone on their engagement with Congress and senators to push back and fight for the rights and dignity of immigrants," Mumita said. "The most worthwhile aspect of the trip was the engagement with our representatives in D.C. and strengthening of networking with other dioceses and communities in our state, cities and churches." 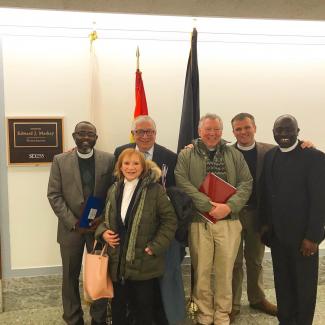 The Rev. Sean Leonard, the rector of St. Dunstan’s Church in Dover, was also among the Diocese of Massachusetts members on the trip.

"I guess I decided to go because, first, I felt compelled by my baptismal covenant to strive for justice and peace in the areas of immigration and refugee resettlement. For years I have been talking to folks about what striving for justice should look like without really doing it.  This trip afforded me that opportunity,” Leonard said by e-mail.  "Secondly, I felt compelled to work on changing our country to be a more just, loving and compassionate nation.  Our country is not where I think it ought to be and I felt it necessary to share that with our elected officials."

"I think the most worthwhile aspect was the training piece.  I walked away from my time with new skills on how to advocate and newfound confidence in actually doing more advocacy work," Leonard said.

The Rev. Canon Dr. Jean Baptiste Ntagengwa, Canon for Immigration and Multicultural Ministries in the Diocese of Massachusetts, organized the trip, with support from neighboring New England dioceses and in partnership with Episcopal Migration Ministries and the Episcopal Church's Office of Government Relations.

"It was just great, and I want to really commend everyone who went for their commitment," Ntagengwa said in an interview.  "There is a lot of talk about the need for change, and this group really stepped forward to take some action based on their faith and values."

He gave particular credit to participants Paula and Harvey Bennett, a Jewish couple who contacted him after reading a letter issued last summer by Bishop Alan M. Gates about the need to take action on immigration reform. They inspired the trip by their initiative, Ntagengwa said.

"From the moment the Office of Government Relations of the Episcopal Church opened our day-long training session, until we exited the Senate Office Building after meeting with the senior policy advisor of Elizabeth Warren, our advocacy trip was nothing short of amazing," Paula Bennett said in an e-mail to Ntagengwa.  "However, what I found most amazing was how the many people we encountered so appreciated hearing from us. My main takeaway is that our voices truly have the potential to bring about change. So, let's all speak up."

Trip participants will reconvene on Jan. 16--in person in Boston and by video conference call--to evaluate their experience and make plans for next steps.  Anyone interested in joining these efforts is invited to contact the Rev. Canon Jean Baptiste Ntagengwa at jbntagengwa@diomass.org or 617-482-4826, ext. 400.