"Not the way we expected but still positive": House of Deputies amends Barbara C. Harris commemoration proposal and sends back to bishops

July 11, 2022, Update:  With the House of Bishops' concurrence during this morning's legislative session, C023 as oft-amended is now adopted, commemorating Bishop Barbara C. Harris's consecration date, Feb. 11, in Lesser Feasts and Fasts while the Standing Commission on Liturgy and Music works to develop historical, biographical and liturgical materials for General Convention's future potential consideration on including Harris in the church calendar.  Read the completed resolution text here.

July 10, 2022:  The House of Deputies voted during its morning session on July 10 to proceed with a process toward adding Bishop Barbara C. Harris to the church's commemorative calendar by approving additional amendments to resolution C023. 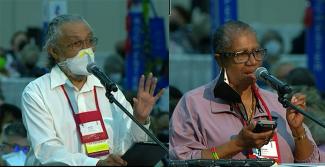 The House of Bishops took initial action on C023 on July 8, the General Convention's opening day, amending the original proposal with a directive that Feb. 11 be included in Lesser Feasts and Fasts to commemorate the date of Harris's historic consecration in 1989 in the Diocese of Massachusetts as the first female bishop in the Anglican Communion.

The version of C023 that the House of Deputies approved today incorporates amendments recommended by Legislative Committee 12 that handles prayer book, liturgy and music matters, including direction to the SCLM to prepare historical, biographical and liturgical materials prior to the next General Convention "in preparation for the General Convention to consider adding the commemoration of her life, work and witness" to the church calendar.

The legislative committee was recommending reinstatement of some of the language removed from the version adopted by the House of Bishops on July 8 so that the measure could move forward without being at odds with established criteria for adding a commemoration to the church calendar, the committee's chair, the Rev. Dr. Ruth Meyers of the Diocese of California, said in her presentation to the deputies.

"One criterion, the establishment and spread of local commemorations, has clearly been met, as evident in the 16 resolutions [proposing Harris's commemoration] submitted to this convention," Meyers said.  "Another criterion calls for a passage of time, as much as two generations or 50 years to elapse after a person's death.  The committee was reluctant to set a precedent for an accelerated timetable."

"The resolution before you proposes two steps.  First, a commemoration of Barbara Harris's decision to step forward and answer the call to serve as a bishop" on Feb. 11 as proposed by the House of Bishops, Meyers said, with the second step being that the "legislative committee does not want this focused commemoration of Bishop Harris's ordination as bishop to short circuit a commemoration of her full life, work and ministry, hence the direction to the Standing Commission on Liturgy and Music to develop materials that can be introduced at a later date."

Speaking in favor of the proposal, Diocese of Massachusetts deputy Byron Rushing said, "This is not happening the way that members of the 16 dioceses in this Episcopal Church who put in resolutions around beginning the process for Barbara Harris to be on the calendar expected it to happen, but we truly hope that this house will agree that we have to begin some part of that process at this convention."

"This is essential only because we need to recognize people as soon as we, this convention believes that it is appropriate," Rushing said.  He noted the controversy at the time of Harris's election as bishop suffragan in Massachusetts and how "she moved into that controversy with great grace because she had moved into many previous controversies leading this Episcopal Church to its understanding of all the baptized as equally powerful and important."

Deputy Deborah Stokes-Wayne of the Diocese of Southern Ohio agreed.  "It's not exactly in the way that we wanted, but it is a movement, and it is positive, and it is a way for us as we are still living and know the people that we are talking about, particularly with Bishop Harris, [to] continue to work on how we acknowledge that during the time of our lifetime when we can share this not only with each other but with those who are coming after us."

Deputies from the dioceses of Pennsylvania and North Carolina also spoke in favor of the amended C023 before debate time expired.  No one spoke against it.

C023 as amended by the deputies now goes back to the House of Bishops for consideration.