“Our gift to one another and to the world”: Congregations reinvent Christmas pageants in time of pandemic 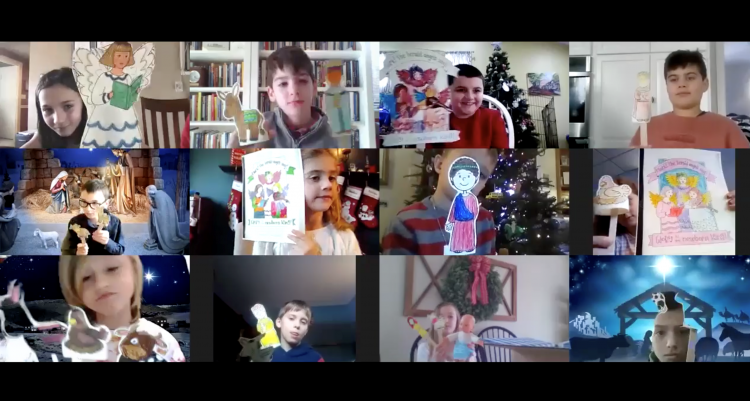 In a year that has not just encouraged reinvention, but demanded it, congregations across the diocese are coming up with creative and safe ways to tell the familiar story of the birth of Jesus anew.

At St. Mark’s Church in Southborough, the annual pageant usually consists of in-person rehearsals starting in November, but this year, the congregation will be completely virtual, so they came up with the idea to send out paper dolls representing the different pageant characters for the children to color and decorate, and then use them to act out the pageant together on a Zoom call.

The Rev. Phil LaBelle, the rector of St. Mark's, explained in an interview how this familiar retelling of the nativity story brings families in the church closer to each other and to the meaning of the season--as children in the pageant share the experience with parents and grandparents who once played parts in their own pageants growing up.

“It’s a marker, a place that we mark time in our lives and see how our faith continues to be important for younger generations and for our kids to come up in all of the graciousness and hilarity and the joy that they have, to remind us, yet again, what this story is all about--the birth of Jesus,” LaBelle said. “It’s that sense of them owning the story themselves and wanting to be a part of it which is just delightful. It’s their retelling of the story allowing it to once more enter in--the thing that we’ve been preparing for--Jesus entering into our lives.” 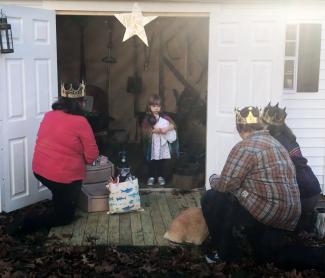 Courtesy Photo A family from St. Andrew's in Framingham records a pageant scene at home.

In a normal year, St. Andrew’s Church in Framingham would hold a four p.m. Christmas Eve service in which--as the narration of the nativity story is being read--children in the congregation would bring up creche figures to create the full nativity scene. At the end of the service, everybody brings forward a glow stick to place around the creche manger, creating a visually stunning, glowing nativity scene.

This year, the congregation of St. Andrew’s, together with partners in the Lutheran Church of Framingham, with whom they share their church building, are pre-recording Christmas pageant scenes safely at home with their households. The video clips will be edited together, along with the appropriate hymns, and played through a projector in the parking lot of the church on Christmas Eve at 4:30 p.m. for a worship service and drive-in movie experience.

With the help of an audio engineer, the pageant audio will broadcast to a radio station and members of the congregation can stay in their cars and safely watch and listen to the pageant, singing along with the hymns. There will be a prayer at the beginning and--after a blessing at the end--members of the congregations will be invited to take a glow stick home and put it in their window, as a nod to their usual tradition.

In an interview, the Rev. Julie Carson, St. Andrew's rector, noted that the way that they try to do their pageant, even in a normal year, is to allow for flexibility and to allow children to be involved in any ways in which they feel comfortable. A few years ago, that meant scraping together a seagull costume for a child in the pageant; this year, it meant doing things in this very new, but still meaningful way.

“It’s kind of touching on the most beloved parts of Christmas, but reinventing them in a safer kind of way,” Carson said. “It’s OK to be flexible, and it’s OK to work with what you’ve got, and this year, we’ve all got to do that. We couldn’t recreate what we do in church.  We had to modify and work with what’s safe, so I’m proud of people for being flexible, and also for wanting this so badly.” 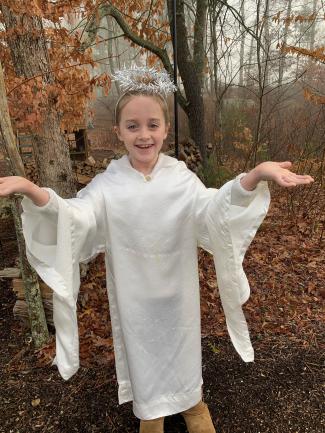 Courtesy Photo Audrey Peterson, age 7, from Christ Church in Swansea tries on her angel costume in preparation for the drive-through nativity. “This year has made everyone think outside the box,” said Audrey's mother, Christina Peterson, in an e-mail. “We want the children to have an extraordinary memory from a year that was anything but ordinary.”

Christ Church in Swansea is also trying something new this year with a drive-through experience. Christ Church is collaborating with St. Luke’s Church in Fall River and the Church of Our Saviour in Somerset to use the grounds of the church for a "Living Nativity."  Using the church driveway, cars will be able to slowly circle the church to take in scenes complete with live animals, such as sheep, a goat and a donkey that the churches are working with local partners to have for the event.

“I love the Christmas pageant as a teaching tool for our children,” said the Rev. Susan Lee, the rector of St. Luke’s Church in Fall River, in an e-mail. “The children love the pageant, too. This year everything is different. The nativity at Christ Church is a way to preserve some of that fun and good teaching this year. It will be cold, as perhaps it was for the Holy Family too. I hope that it will be a memorable time for the children, and that we all will gain insight into the Christmas story.”

“I think the pageants are the children’s way of really entering the Jesus story, when they can dress up and take on a part,” the Rev. Alan Hesse, the rector of Christ Church in Swansea, said in an interview. “I think it’s a first piece of really taking on and imagining, ‘What would it be like?’”

Children who wanted to participate have been given their costumes ahead of time so that they can show up on the day of the event, safely protected with masks and ready to present a physically distanced nativity scene.

“We’ll have a little enclosure/stable where Mary, Joseph and the baby will be, socially distanced with masks,” Hesse said. “We might have two Marys and three Josephs--we don’t know and that’s fine. Twelve magi or two magi, I’m hoping it will be special and something they can hold onto. We’ve never done this before, but this is the perfect time to tell the Jesus story in much the same way, just in a different place--with live animals!” 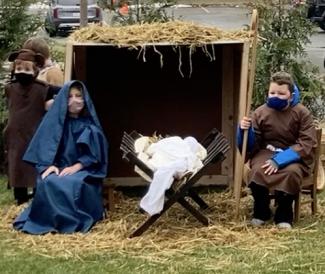 Courtesy Photo Young members of Christ Church in Needham recorded their pageant outside while wearing masks for safety.

At Christ Church in Needham, instead of the traditional indoor Christmas pageant, they will be recording the pageant outside with all participants wearing masks, and the congregation will watch the finished video together via a Zoom watch party on Christmas Eve.

In an interview, the Rev. Nick Morris-Kliment, Christ Church's rector, said that in places he’s served, pageants have been a chance to gaze on the children and see them as innocent bearers of the future in the way that Jesus was when he was born--helpless, vulnerable, but also with a future ahead of him that changed the world.

“I think that’s what we hold in our hearts for our kids also.  It’s the wonder of childhood and a moment of innocence in a world that can be really scary, especially right now,” Morris-Kliment said. “With our pageant this year, we want to maintain that in a new way that makes sense for our contexts, but not give it up. It doesn’t have to be perfect; you just have to show up as best you can.”

“My feeling all along has been, Jesus’ birth was not a nicely choreographed costumed event.  It was outside, for sure, so whatever we produce, I think is a gift,” Morris-Kliment said. “And if it looks like a home movie, even better.  It’s about the gathering of the community around the birth of Jesus, and however humble that is, it’s our gift to one another and to the world.”