"Our World, Our Future" campaign invites youth into community service during COVID-19 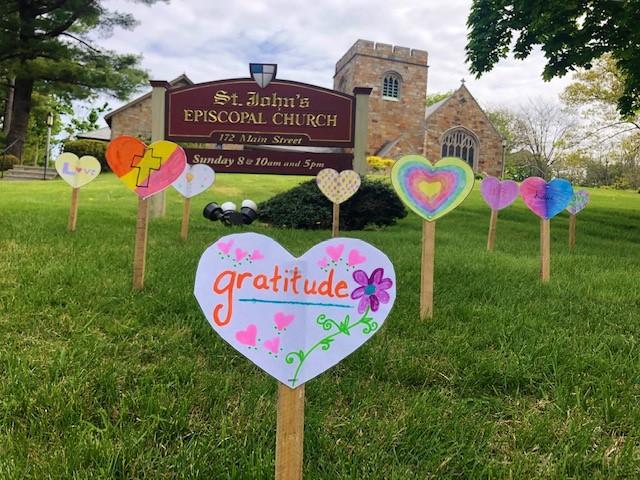 Courtesy Photo Laminated paper hearts made by the youth of the Parish of St. John the Evangelist in Hingham stand on the church's lawn as a sign of support for healthcare workers on the front lines of the COVID-19 pandemic.

Changing the world is a daunting task, but young people across the diocese are being invited to step up in a time of great need to help do just that, one community at a time.

As the COVID-19 pandemic began, diocesan youth missioner the Rev. H. Mark Smith found himself in video meetings with youth workers at a diocesan as well as national level, discussing youth ministry in the time of COVID-19 and the common desire to move youth from mourning what they are losing into action and ways to feel like they’re making a contribution to their communities. It was out of these conversations, Smith said in an interview, that came the idea for a diocesanwide youth ministry outreach campaign, Our World, Our Future: Young People Responding to Urgent Needs.

“It’s, number one, to encourage and help organize some efforts to offer relief in places that urgently need it right now,” Smith said. “Second is to give young people--who like all of us are feeling pretty powerless--a way to feel useful and powerful. That then gives us an opportunity to raise up to the rest of the diocese the reality of our young people as partners in ministry today, not some sort of special-needs population that needs to be taken care of.”

“Our World, Our Future” was the theme that the Diocesan Youth Council chose this year for its middle and high school retreats, and the same theme felt appropriate for the new campaign, said Eva Dalzell, a Life Together fellow serving in the diocesan Office of Youth Ministry, in an interview.

“The way that we were using that for the middle and high school retreats was, ‘What does the world look like? What does my world look like? What power do I have to make a difference in my world? How is God moving in the world and in my life?’” Dalzell said. “But when we were trying to come up with a name for this project, it felt very spot-on to the kind of work that we’re trying to do.

The new campaign is designed to help organize youth groups, individual young people and others to support outreach efforts according to their abilities and interests, all while maintaining recommended physical distancing protocols and current public health policies.

As part of this campaign, the Office of Youth Ministry developed an online catalog of service opportunities across the diocese, categorized in four broad areas of ministry: Feeding and Gifting; Companionship; Fundraising; and Advocacy.

Smith explained that it was important to include advocacy as an option, to raise it up to young people and youth workers who might be trying to organize their young people to push for systemic change, while responding to more immediate needs, such as feeding people.

Advocacy opportunities listed give young people an opportunity to use their voice to support local or worldwide projects, such as working with the Massachusetts Community Action Network, a statewide network of community advocates, or the Youth Activism Project--a worldwide organization supporting young people advocating social change. 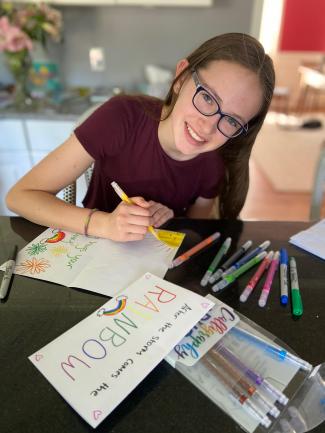 Courtesy Photo A young member of St. John's in Westwood makes greeting cards to send along with food that St. John's will provide to common cathedral, an outdoor congregation serving the homeless community in downtown Boston.

Another example includes supporting the Rev. Dr. Canon Jean Baptiste Ntagengwa, Canon for Immigration and Multicultural Ministries, in his work to organize support around Deferred Action for Childhood Arrivals (DACA)--a program that allows those brought to the U.S. as children to remain in the country without fear of deportation.

The category of "Feeding and Gifting" is one that is much needed during this time, and many across the diocese have been mobilizing to provide food and essential items to those who need them most.

Emily Sugg serves as minister of children and youth at St. John’s Church in Westwood and has used the launch of the "Our World, Our Future" campaign to form a three-parish collaboration between her parish, Epiphany Parish in Walpole and First Parish of Westwood (UCC). The youth from all three are making sandwiches and providing other food for Ecclesia Ministries and its “common cathedral”--an outdoor congregation serving the homeless population on Boston Common.

St John’s in Westwood has had an ongoing relationship with common cathedral which has included yearly participation in the CityReach program, as well as annual picnics and bowling outings which the youth and their families organize and host. When the opportunity came to provide meals to the community during this time, Sugg decided to see if nearby churches wanted to help--which they did--and, in addition to making sandwiches, youth have been creating cards and drawings to send along with the food for the common cathedral community.

“Although we can't do the kind of on-site outreach work we are used to doing, we can still do a lot from our homes to help and encourage those who are especially vulnerable and lonely during this pandemic,” Sugg said in an e-mail. “Youth ministries are expanding into family ministries, but the focus remains on sharing God's love and facing into the world as people of faith. 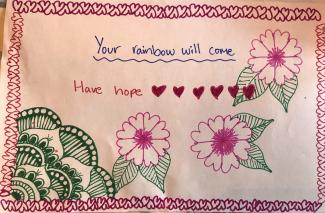 Courtesy Photo One of the cards made by the youth of St. John's, Westwood for people of the common cathedral congregation in downtown Boston.

“It makes so much sense to do these feeding and comforting ministries together,” Sugg continued. “I think we all have a better sense now of what it feels like to be lonely and/or to be cooped up, which homeless folks experience often. I pray that these times lead eventually to more connections, not less.”

Another group of youth creating cards to do the ministry of companionship are the youth at the Parish of St. John the Evangelist in Hingham. Since in-person worship was suspended, their middle school youth group has been meeting weekly online via Zoom, and found that they had a common desire to do something for other people to help them with their own anxieties.

“At one of our first online gatherings, we were talking about what makes us anxious or worried in this time, and brainstorming strategies that help us deal with our anxieties. [The middle school youth group] responded that it helps them with their own worry when they can help someone else,” said the Rev. Jack Clark, the associate rector of the parish, in an e-mail.

In addition, young people from the parish have been decorating hearts, since residents in Hingham have been putting hearts on their doors and windows to show support for healthcare workers. The decorated hearts are being laminated and collected to create a “garden of hearts” on the front lawn of the church.

The Rev. H. Mark Smith emphasized that the "Our World, Our Future" outreach campaign aligns with diocesan mission strategy for building relationships across the diocese, engaging the world in new ways and--in its promotion of youth leadership and youth organizing--re-envisioning congregations. Smith said that as terrible as this pandemic is, it has given many an opportunity to see more clearly than ever that what you do as an individual can have a huge impact on other people.

“My understanding of what it means to be a follower of Christ is to be an active agent in rebuilding the realm of God on Earth as it is in heaven, and so taking action is an important part of that,” Smith said. “It is very clear now that yes, we are all connected whether we like it or not.  What you do has an impact on me. The virus is having negative impacts on us, but we can have positive impacts on each other.”