A lively and thought-provoking exchange between young adults and Episcopal Church Presiding Bishop Michael Curry during a breakfast meeting on April 26 highlighted the challenges that people in their 20s and 30s face in their spiritual journeys, and it underscored the need for the church’s renewed engagement with them, according to those who attended.

About 90 people got up early for the gathering with Curry, held at Boston University’s School of Law and hosted by the diocesan 20s and 30s Task Force. The task force was convened by action of last year’s Diocesan Convention and charged with examining and recommending successful models of engagement with adults in their 20s and 30s. 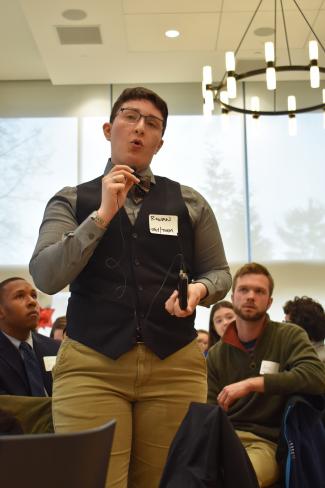 Rowan Pantalena, who serves as the minister for Christian formation and parish administrator at Grace Church in Newton and is a postulant for ordination to the priesthood in Connecticut, asked Curry about models of ministry being developed for young adults who do not feel called to ordination but do feel called to ministry in the church.

"I specified that while I have felt called to celebrate the sacraments since I was seven years old, I have seen so many young adults find the Episcopal Church, and upon showing interest in being involved in the life of the church, are told, 'You should get ordained!' I wanted to know: What else is there?" Pantalena said in an e-mail after the breakfast. "Bishop Curry's answer, about the toxicity of clericalism, was actually really heartening.  It's not often that ordained folks, especially in positions of power, are willing to own their privilege, and dismantling clericalism, I think, might be part of the solution."

In his response to Pantalena at the breakfast, as well as to a subsequent question about how to get more young people into church, Curry spoke about the need for the church’s motivation to be about transformation of life instead of just building a bigger church, and that, when that happens, people really start walking a “way of love.” Ordination is not the only way, he said.

“I think the presiding bishop’s honesty about the limitations of ordained leaders and the institutional church helped him earn the trust of the young adults at the breakfast,” the Rev. Thea Keith-Lucas said. She is the Episcopal chaplain for the Lutheran-Episcopal Ministry at MIT.

Questions from the young adults at the breakfast covered a broad range of topics. A student from the Boston University School of Theology who identified himself as a member of the United Methodist Church (UMC) asked Curry if he had any words of advice for those persisting in struggles for justice, especially in light of recent UMC decisions regarding inclusion of LGBTQ+ people.

Curry replied that the nature of progress is that you have to “keep inching along like the inchworm.” 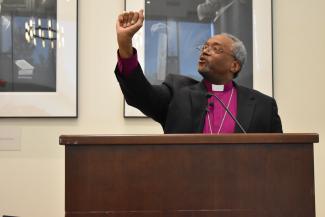 Chloe Abu-Jaber, a member of the 20s and 30s Task Force, said after the breakfast that she was particularly struck by Curry’s response.

"I am Middle Eastern, among other ethnicities, and dealing with racial prejudice never really gets easy to handle.  Bishop Curry's reply that we need to strive to love those who shun or scorn us who are different wasn’t what I expected, and I’m still grappling with that answer," Abu-Jaber said.  "How can we love those who seem to despise and dislike people who look different? That’s something I’m working on coming to terms with, and will probably take me a while to unfurl fully.  But he got my mind working, and these wheels keep spinning after hearing him preach."

Jane Heyes, a graduate student at MIT, said she left the breakfast feeling hopeful and energized to live a way of love. 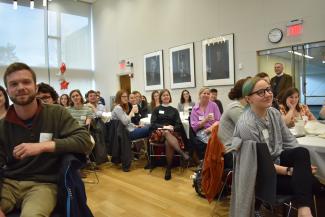 Bridget K. Wood Worth getting up early for: Both Bishop Curry and the young adults gathered came away from the program with food for thought.

“I find a lot of comfort in the way he talks about enacting Jesus' love and the role we can have in accepting and then sharing that love, because that's a big part of what brings me to church in the first place,” Heyes said. “He's also a fun guy to listen to, and I love that he makes his points through humor and warmth and compassion rather than authority or fear or anger or even disappointment.  I left feeling very hopeful and like the problems that I see in the world and in the church are very much on his mind, and I felt more energized to do love as an action and as a practice.”

The Rev. Isaac Everett, Director of the Charles River Episcopal Co-Housing Endeavor (CRECHE), said he felt that the presiding bishop offered exactly what he and others like him needed.

"Michael Curry paints such a vivid picture of what the church can be, and it's a vision that's full of joy and purpose,” Everett said. “It's exactly what I need from a presiding bishop, and it's what I love about hanging out with other 20s and 30s [people] in our diocese.  By and large, we're way more excited to talk about what the church is becoming than to mourn what the church has lost," Everett said.