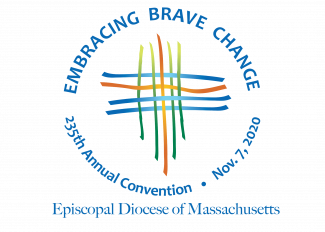 Signaling that the work of the church continues despite pandemic, this year’s annual Diocesan Convention moves online and will seek to respond to momentous issues of these times.

Racial justice and the climate crisis are the focus of resolutions to come before the Diocesan Convention at its virtual gathering next month—under the theme of “Embracing Brave Change” drawn from the multiyear diocesan mission strategy and particularly resonant in this unusual year.

In order to exercise voice and vote, delegates and clergy members of the convention will participate via the online videoconferencing platform Zoom.  Registration is open until Oct. 30.  A livestream of the proceedings, via YouTube, is planned for those who simply wish to observe.

Three justice-focused resolutions have been proposed for convention's action this year.

One of these, “Call for Repentance and Reparations,” requests that Diocesan Council and the congregations and institutions of the diocese “explore their historic involvement in and present wealth derived from the forced labor of enslaved people.”  It also asks that a Reparations Committee be created to provide resources and expertise for this work, under the auspices of the Racial Justice Commission that is currently in formation, and to explore models and best practices for a reparations fund, with progress reports to Diocesan Convention next year and beyond.

Another proposed resolution, “A Call to Address the Neglect of the Seven Historically Black Churches of the Diocese of Massachusetts and Strengthen Their Interrelationships,” also calls for a new committee of the Racial Justice Commission.  This one would be fully representative of the diocese's seven historically Black churches and charged with addressing their “neglect—through overt and systemic discrimination; unequal treatment; and the disparate impact of circumscribed decision-making.”

The resolution would also provide these churches with “opportunities to address their own internalized racism, work collaboratively rather than competitively and develop the capacity to flourish through a discernment process of deep listening and study of shared histories, mutual goals and collaborations.”

A third resolution, “Response to Presiding Bishop Curry's Declaration of a Climate Emergency,” calls on the bishops of the diocese to issue a proclamation declaring a climate emergency, and, working with the diocese’s Creation Care Justice Network, to seek co-signers from other New England Episcopal dioceses and faith and secular communities in order to “create a foundation for broad future collaborations.”  It also encourages the communities and people of the diocese “to expose the greed at the root of the destruction of God’s Creation" and to do this "through preaching, education and outreach.”

The convention will vote on the proposed $9-million diocesan budget for 2021, which sets aside $600,000 for targeted pandemic relief for congregations, and it will elect alternate deputies to the next Episcopal Church General Convention as well as members of other diocesan governing bodies and groups.

Voting members of the convention had online opportunities to discuss the proposed resolutions and provide feedback during an open comment period in September, in addition to the regular series of pre-convention forums in October, conducted this year online via Zoom.

Find the order of business, the full text of proposed resolutions and nominees for election in the convention Handbook.  All links, materials and updates are posted at www.diomass.org/diocesan-convention-2020.