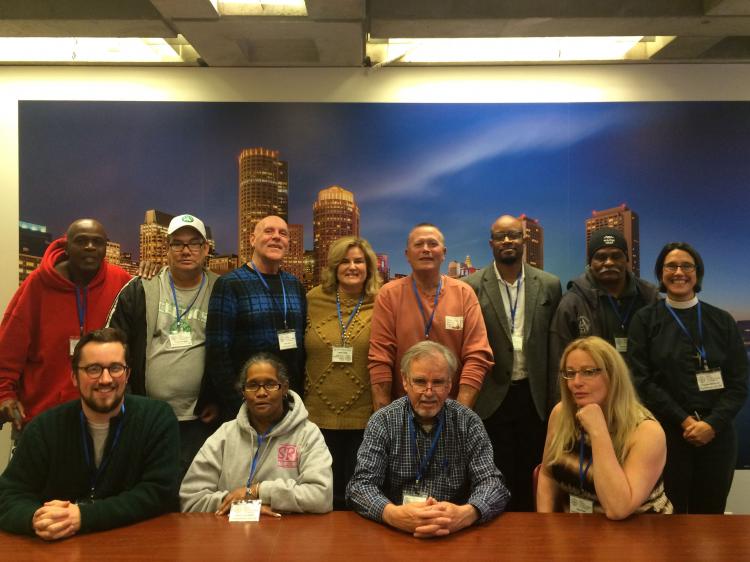 Every other Wednesday, a council made up of 13 people who are either currently homeless, or have been homeless in the past, meets at Boston City Hall. The group congregates in the lobby and, with plentiful amounts of pizza, salad, pastries and coffee, heads upstairs to gather with representatives from different city departments, as well as other guests, to discuss issues faced by people experiencing homelessness and to find possible ways to help end homelessness in Boston.

Each meeting has the same format: After introductions, a reflection is offered, and meeting minutes from the previous week are reviewed and approved. Council members and guests sit down and share their meal together. After dinner it is straight to work.

On a recent cold November evening the topic of the meeting was winter emergency management, and the special guest was Jim Greene, who has served as the director of the Emergency Shelter Commission and works for the Department of Neighborhood Development.

During the meeting, Greene and the council members discussed different issues facing those experiencing homelessness, especially in the winter cold, as well as possible solutions or ways to help--including encouraging those who are unhoused to have a “winter safety plan” for where they can go for shelter during a weather emergency.

This unique group is called BACHome, which stands for Boston Advisory Council on Ending Homelessness. This official council exists because of the MANNA (Many Angels Needed Now and Always) ministry of the Cathedral Church of St. Paul in Boston. Led by the Rev. Canon Cristina Rathbone and the homeless community with which she works, MANNA has existed for eight out of the 10 years that Rathbone has served at the Cathedral Church of St. Paul.

“Through MANNA, we seek not only to welcome folks across differences of class, wealth, culture, race and mental ability, but also to empower all people to claim their place as essential members of our community,” the cathedral’s website explains.

The MANNA program has many different ministries within it, such as the Monday Lunch Program, Monday Eucharist, the Black Seed Writers Group and the MANNA Singers, as well as the Sunday morning “CoffeeKlatsch” meeting out of which the BACHome group was formed. The CoffeeKlatsch is known as the “political wing” of the MANNA community, according to the cathedral’s website, and brings people together to discuss and find ways to advocate on behalf of the wider homeless community.

As part of this advocacy, a few years ago the group wrote to the mayor, and he sent Boston’s chief of housing, Sheila Dillon, to come to a meeting. After attending meetings for some time, Dillon brought along her colleague Laila Bernstein who serves as advisor to Mayor Walsh for the Initiative to End Chronic Homelessness in the City of Boston. Dillon and Bernstein began regularly attending these CoffeeKlatsch meetings and bringing their colleagues to hear directly from people experiencing homelessness.

After two years of attending the meetings, Bernstein asked Rathbone if she would be willing to build and facilitate a formal Advisory Council on Ending Homelessness. Rathbone agreed and BACHome was born.

In a letter of gratitude written to Bishop Alan M. Gates, Bernstein wrote: “As a result of attending these [CoffeeKlatsch] meetings, my colleagues and I have gained a deeper perspective and renewed focus on meaningful ways to reform Boston's complex homeless response system. The MANNA Community at St. Paul's has created something no other faith group in Boston has achieved: a community that actively invites people experiencing homelessness to fully belong and create social justice by virtue of their communion.”

Of the original council group, two members were from the MANNA community. Rathbone explained in an interview that the community felt it was very important that the council not be just a group of people from MANNA speaking for homeless people all around the city, but rather a broad-based group with people from different parts of the city who were not necessarily connected to the MANNA ministry at the cathedral.

“It is a self-selection process to join the council and the only criteria is the desire to give to others and to help them not suffer the way that they themselves have suffered, and so if that is the thing that unifies a community, you can imagine that the community is pretty profound,” Rathbone said. “People are very different but by now we know, love and respect each other and are filled with admiration for each other,” she said. “We’re all there only because we want to be, and that’s a rare thing--a community of desire,” Rathbone said. 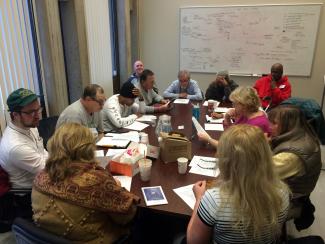 Rathbone said that through her ministry with the MANNA community she has long recognized that people who are unhoused have extraordinary gifts to give and wisdom to share. This council allows these people to have a platform to share their knowledge and experience and make a difference in the lives of people both housed and unhoused.

The mayor’s advisor Laila Bernstein explained in an e-mail the significance of the council: “BACHome is a critical partner for guiding the work of myself and my colleagues and integral to the city’s effort to end homelessness. The council members all have lived experience, and that perspective is not something that any of us in the field can bring to the table unless we’ve experienced homelessness ourselves.”

One of the major conversations that the council has had is about how to transform the shelter system to become more effective at helping people avoid homelessness or exit homelessness more quickly. These conversations started with just the council and city staff, but then the city hired a team of consultants to look at this issue, meet with the council and make recommendations. One of the main recommendations that emerged was to change the culture and the outcomes of the shelter system by hiring peers with lived experience to help people navigate to housing.

“Peers have expertise, insider knowledge, as well as an authority about what it takes to rebuild a life in housing after experiencing homelessness,” Bernstein said. “Even though the council members had given this recommendation many times, it didn’t click until the last focus group that a large grant the city was applying for at the time for housing navigation should be designed as peers hired to do housing navigation. After that, the city rewrote the proposal and applied for over $500,000 in federal funding to make this element of system transformation a reality.”

This is a direct result of the work of the council, and Rathbone said these peer communities are vital because people “will be helped by the people who can best help them--which is people who have been through that ordeal themselves and emerged stronger, and in that way, everybody can give and everybody can receive and you build this mutual community of giving and receiving, which really does lead to life.”

Another hope of the council going forward is that it might serve as a model for other communities to create similar councils, and help get these groups started, emphasizing that they would be locally based and not all reporting to the original council in Boston but rather addressing the unique needs of their own communities in the same format by listening to the voices of those who have experienced homelessness.

“No one's interested in making a central source of power, but replicating in other local contexts the same work of including the giftedness, voice and wisdom of people who have experienced homelessness,” Rathbone explained. Those who are involved with the council have been able to see the difference that it has made in people’s lives and hope that it will continue to do so in the future.