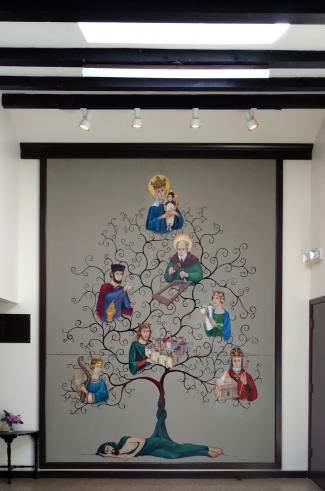 Courtesy Photo Bancroft's Jesse Tree mural in its new home at the Church of Our Saviour, Middleborough.

In parish news in April, readers learned about a 16-foot mural that was painted by artist Martha Bancroft in 1971 for the chancel wall of the former Parish of the Messiah in Auburndale. When Messiah merged with Trinity Church in Newton Centre in 2015, the mural was removed and was in need of a new home.

After seeing the article about the mural, the senior warden of the Church of Our Saviour in Middleborough, Lisa Govoni, e-mailed Bancroft to see if Our Saviour might be the new home for the painted Jesse Tree. Bancroft was thrilled, and after visiting the church, it was decided that the mural would go in the parish hall.

The mural was originally finished in time to be dedicated at Pentecost, and has been installed in its new home 48 years later during the same time of year.

"I am so pleased with the results of finding a home for my mural; it is exactly the way our community should operate," Bancroft said in an e-mail. "By that I mean creatively helping each other, and with an awful lot of kindness going on as well."

Govoni said she knew that the mural belonged at Our Saviour because the church had already been considering ways to change the messaging of the parish hall, so that it said something about who the congregation is as a community of faith. Govoni said that meeting Bancroft and deciding on a place for the mural together was "like meeting an old friend."

"I certainly believe that the messaging [in the space] has changed," Govoni said. "On both sides of this story, we were open to the presence of the Holy Spirit and have a great story to tell."

The rector of Our Saviour, the Rev. David Milam, was on sabbatical when the mural was installed, and upon his return was delighted with the new addition to the parish hall.

"I hope it will achieve what most parishes would hope when someone visits them," Milam said. "It invites a question not only about the painting, but who put it up: 'Who are these people?' We pray and hope as a community that they will want to find out more."