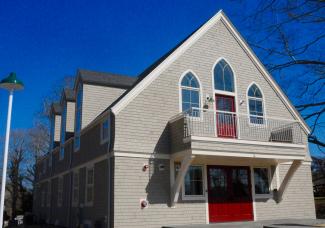 Bob Haskell The Church of the Messiah in Woods Hole will host its first public event, an Easter Day reception, in its new Parish and Community Center on April 21.

The Church of the Messiah in Woods Hole will open its new Parish and Community Center on Church Street during an 11:30 a.m. reception following the Easter Day service on April 21.

It is a renovation, funded by a $2.5-million capital campaign, of the original first church that was built in 1852 and that has occupied the site since the current stone church building was constructed in 1888.

“This has truly been a labor of love,” the rector, the Rev. Deborah Warner, said in a news release. “Parishioners, including members of the building and capital campaign committees, have been deeply involved in this project for five years.”

“Our parish is extraordinarily grateful for the community’s support in renovating this 19th-century church building and rekindling its vision for the 21st century,” Warner said. “Our neighbors and other people in Woods Hole have been keenly interested in our plans, and have offered wonderful input into this building’s construction and how it can benefit the community.”

The two-story center’s exterior reflects the historic, Gothic Revival style of the original church, punctuated by vertical windows arched at the top. “It was the style of the day,” the center’s designer, John Keenan of Falmouth’s Keenan and Kenny Architects Ltd., said in the news release. Delphi Construction Inc. of Waltham and Cape Cod was the general contractor.

The inside includes a spacious Woods Hole Room on the second floor for parish, community and service organization meetings--as well as for lectures and concerts. The Fay Foyer, which adjoins the Woods Hole Room, honors the memory of former philanthropist and longtime summer resident Joseph Story Fay, who donated the land and funding for the first church 167 years ago.

The church’s administrative offices and music department are located on the ground floor, and an addition to the back of the original building accommodates a kitchen on each level as well as an elevator.

A series of special events after Easter is being planned to introduce the general public to the Parish and Community Center which will be dedicated on July 7, following the 10 a.m. Sunday service, by the Rt. Rev. Alan Gates, Bishop of the Episcopal Diocese of Massachusetts.