On Sunday, Oct. 20, St. Michael's Church in Milton dedicated and blessed a new stained glass window in the church, in honor of the "Women of St. Michael's."

The "Women of St. Michael's" was a parish group originally formed in the 1960's to "give a unified structure and identity to women's activities," the Window Committee explained in a letter that was part of the dedication program.  After the group disbanded, it left a few thousand dollars in an account that remained untouched until recently. 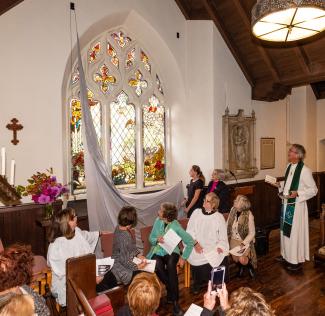 Jim Scherer The congregation of St. Michael's unveils the new stained glass window at the dedication ceremony on Sunday, Oct. 20.

To honor the legacy of the original Women of St. Michael's, the vestry asked the current women of the parish to decide how the leftover funds from the group should be used.

After a brainstorming session in January of 2018, it was decided to replace the opaque window in the memorial chapel with a stained glass window honoring all women of St. Michael's.

Though the money in the account would serve as a starting point for the project, it would not cover the full cost of the project, so the congregation, under the leadership of the Window Committee, proceeded to raise funds, both within and outside of the parish--including contacting the families of the original "Women of St. Michael's" group.

Vicki Rugo, a member of the Window Committee, said in an e-mail that the process of locating and contacting the relatives of the Women of St. Michael’s members to tell them about the project was a reminder of how vital and dedicated those women were to the life of St. Michael’s.

"Parish histories made it very clear that women played an essential role in the parish from its founding in 1895," Rugo said. "And outreach was a high priority for women from the beginning, which confirmed to me that the window with its view out to the world was exactly the right way to honor all the women of St. Michael’s, past, present and to come."

The window was created by Boston stained glass artist Jim Anderson and features elements of nature, including animals and plants. The window intentionally leaves clear diamond-paned glass that looks out onto the garden at St. Michaels. The inscription at the base of the window reads, "To the Glory of God and in honor of all the Women of St. Michael's."

"I think the parish and the descendant families stepped up beautifully, and gave significant expression to the role played by these women in the 20th century, and the role they play today in sustaining our ministries," said the Rev. Hall Kirkham, the rector of St. Michael's, in an e-mail.

Sheila Monks, who led the project, said in an e-mail that a window is a great symbol for the church, especially this kind of window, with its section of clear glass bringing the outside world in and letting people see what is beyond the confines of the building.

"For centuries, the church was a closed entity, sure of its mission and very careful who it let come through its doors," Monks said. "Now we are able to look beyond those limits, expand our horizons and wave to those outside who look in asking for our help." 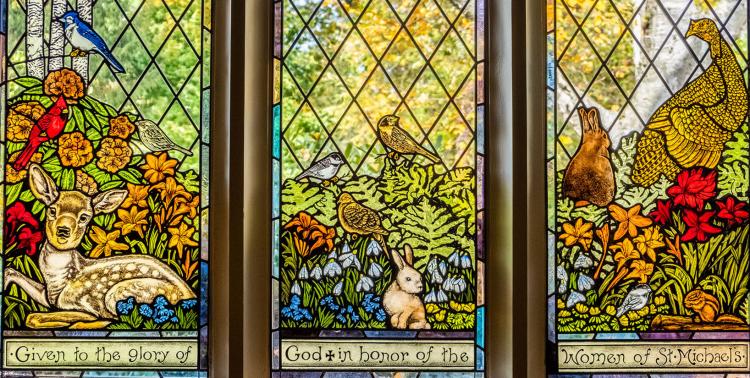 Jim Scherer The inscription at the bottom of the window reads, "Given to the Glory of God in honor of the Women of St. Michael's."