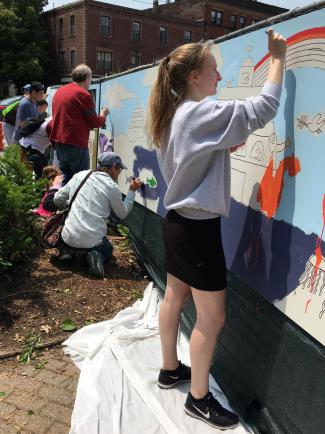 Courtesy Photo Parishioners of St. James's Church in Cambridge and passers-by add to the murals on the construction fence.

At St. James's Church in Cambridge, work has begun to build a new parish hall as part of the preservation and redevelopment project underway, which, according to its website, will transform the church property while preserving the historic church sanctuary. Right now there is a big excavation hole next to the church, surrounded by a construction fence.

Anne Read, a Sunday school teacher at St. James's, said via e-mail that she didn't want people in the neighborhood to think the church hadn't noticed how intrusive it is as people walk down Massachusetts Avenue, so she decided to do something about it.

"I wanted a visible reminder that we, as a congregation, love our neighborhood and want to be active participants in the life of the community," Read said.

Read decided that an art project would be a great way to try and make the construction less obtrusive, while also bringing people together from both the congregation and the community, so on Sunday, June 2, parishioners and passers-by, young and old, stopped to help paint murals of Noah's ark on boards attached to the construction fence. Though the project was Read's idea, the suggestion to depict the story of Noah's ark came from her middle and high school Sunday school class.

"God sustained Noah as he built his floating home and as they sailed through stormy times. God is sustaining St. James's as we do the same," Read said.

The priest-in-charge at St. James's, the Rev. Matthew Stewart, said in an e-mail that he hopes this project is a step in the direction of becoming more connected to the church's Porter Square neighborhood.

"We painted Noah's ark wall murals on the construction fence hoping it will be a baby step towards our vision of being more embedded in, connected with and enlivening to our Porter Square neighborhood," Stewart said.