Shortly after the murder of George Floyd in Minneapolis in May, Bishop Gayle Harris made a virtual visitation to the Parish of St. John the Evangelist in Hingham, and met with the parish's middle and high school youth groups to talk about racial injustice, leaving them inspired to take action.

Also inspired and motivated, the Rev. Jack Clark, who serves as the parish's associate rector, worked with various organizational partners to put together a week-long racial justice organizing camp for young people this past July. 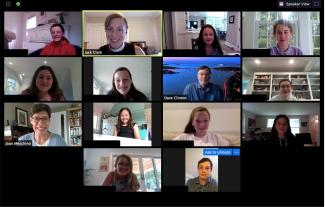 “I think that God is in agony when God witnesses the injustice and the violence and the suffering that’s happening, and God’s response in the incarnation is to come close to that suffering, and I think that’s our call as people who follow Jesus,” Clark said in an interview. “One of our hopes with the camp was to highlight, particularly for white young people, that growing in awareness of the racism both inside and outside of us and joining God in dismantling it is the work of faith and not something separate or extra.”

The camp began on a Sunday, and over the next six days, 50 young people from 11 congregations participated in sessions led, in part, by some of the organizational partners supporting the camp, including I Have a Future and Episcopal City Mission. The camp also worked with the organization Kids4Peace Boston to provide an allyship training for youth via Zoom. The camp sessions allowed participants to break into affinity groups and share personal stories as well as gain knowledge and skills to help them work for racial justice.

"Coming into this program, my knowledge on racial issues lacked a certain amount of  understanding, which I had hoped to expand upon by entering this program. Within the first two days, I had learned more about racial trauma and injustice than I had in a whole school year," said Kaia Patterson, a 10th grader from Christ Church in Cambridge who participated in the camp. “My favorite part about this program was not only its lessons on race, but also, its creation of a supportive community that wanted to hear young voices in addition to their experiences.”

Community organizing sessions towards the end of the week were led by I Have a Future to prepare the youth to meet with legislators the following day to advocate “Raise the Age” (a proposal to expand the jurisdiction of juvenile courts to include those through age 20), as well as the expungement of juvenile records.

Christie Burnside, an 11th grader from the Church of Our Redeemer in Lexington who participated in the camp, explained in an e-mail how camp participants, as they met with state legislators, were able to see that actions taken as a community have the power to make a difference.

“I think this work is important because allyship is comprised of specifically antiracist actions that you take, not claims that you make to ’not be racist’,” Burnside said. “If enough people work to make their voices heard, and work to uplift voices that are not being heard, I believe that through this work we can start to dismantle racism in both our smaller and broader communities.”

In an interview, Dillon Turner, a 7th grader from St. John’s in Hingham who attended the camp, said that older generations are sometimes afraid to listen to younger voices.

“At first I didn’t want to say anything to anyone because I was afraid that no one would agree with me, and now I don’t really care if someone agrees with me, because I went to that camp and learned that it’s OK for people to disagree with you,” Turner said. “I don’t want to stay quiet, I want to help, but I feel like a lot of people won’t listen because they don’t want a younger kid to actually be smarter than them and making better decisions. I think a lot of people think young people are pointless, they don’t have an opinion, they don’t know what they are talking about, but I learned at this camp that it’s OK to speak my mind.”