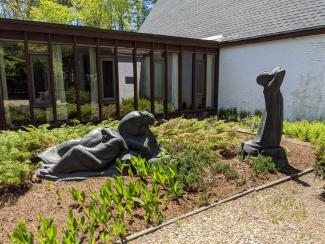 Courtesy Photo "The Agony in the Garden of Gethsemane" sculpted by Walker Hancock.

While many visitors to Trinity Church in Topsfield may notice the set of striking bronze sculptures on the grounds of the church depicting Christ and three apostles in the Garden of Gethsemane,  fewer people have known or understood much about the history of the sculptures or their sculptor until Meg Black, a member of Trinity Church and an art history professor, spent years researching them.

Her project started when a previous rector of Trinity Church asked Black if she would be willing to look into the history of the sculptures, knowing she held a Ph.D. in art. Volunteering for the project, Black began her research and quickly realized that the church had something special on its grounds.

“Whatever information we had was very little,” Black said in a recent interview. “It was one of those things where time goes by and people move on and you just lose this information. People didn’t know what we had with these sculptures, and were just stunned to find out.”

What Black discovered was that the work, "The Agony in the Garden of Gethsemane," was created by famous sculptor Walker Hancock after being commissioned by donor William Coolidge, who donated the land on River Road in Topsfield for Trinity Church to be built in 1959.

Courtesy Photo The figure of Christ has an elongated body and is sculpted with his hands on his face in "agony."

As an art historian, Black was particularly struck by the amount of emotion shown in these sculptures, a noted departure from more academic and rigid neoclassical sculptures.

“I think it’s because [Hancock] has Christ kneeling with the hands over the eyes and the face, he elongates the body, and that stretching is almost like a precursor to being stretched on the cross,” Black said. “I just think there’s so much more going on in this piece, and I’m not just saying that as an opinion, I am speaking from the scholarship to say it.”

When it came time for the statues to be dedicated in a ceremony in 1966, it was decided that the statues would be dedicated to Jonathan Myrick Daniels, an Episcopal seminarian and civil rights activist who was killed the previous year while saving the life of another young activist, Ruby Sales, in Alabama. Though Black hopes to find more information about how this came to be, it is clear, she believes, that the meaning behind these sculptures is only enhanced by the dedication.

“In the world we live in today, with so much animosity, this example of this man bringing so many people together over a tragic event leaves us with this sculpture that’s priceless,” Black said.

Though Black put together many pieces of the puzzle through her volunteer research, she feels there is more to the story and is currently seeking funding to be able to finish her research and publish her findings so others can learn the story of Trinity Church's special sculptures.

Meg Black can be contacted about her research at meg@megblack.com.