"Won't you be my neighbor?": Lower Merrimack Valley Collaborative parishes build relationships from the ground up

Every year in the Merrimack Valley, the Easter Vigil brings together six parishes. Acolytes and readers serve together, and the parish organists take turns providing the accompaniment for a combined choir of up to 50 voices--most of whom don’t often get the chance to sing in such a large group. Children are baptized, candlelight fills the church and these six congregations lift up their voices together in song and prayer. 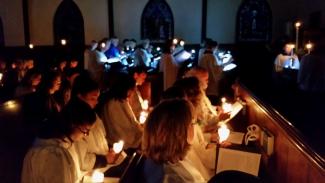 Courtesy Photo Clergy and combined choirs of the six parishes of the Lower Merrimack Valley Collaborative during a past Easter Vigil.

The joint Easter Vigil is the culmination of a collaborative Lenten dinner series, whose theme this year is "Won't you be my neighbor?"

Helen Pickard, a member of Christ Church in Andover, was hired in 2013 as the lead collaborator for the LMVC and is in charge of facilitating its work so that no single parish priest has to do so in addition to her or his regular parish ministry. Pickard explained that each week of the Lenten dinner series will have a specific focus under the theme of “Won’t you be my neighbor?”

“Experience is part of relationship,” Pickard said. “It’s something we share and go forward with.”

Each week the parishes will come together to share a meal and fellowship hosted at one of the churches. The Rev. Kit Lonergan, who is the rector of St. James's Church in Groveland and has been involved in the collaborative for about four and one-half years, said that she believes that sitting and sharing a meal together is something powerful and incredibly meaningful for the parishes involved.

“That’s really what I’m excited about--that we get to know each other and we actually share an experience,” Lonergan said. “It’s meant to be nourishing and it’s meant to bring us deeper. This is a way that we can sit and actually carefully listen and be curious and invest in relationships with one another.” 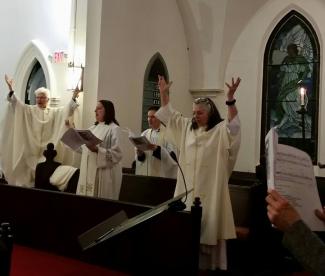 Lonergan believes that this collaboration allows parishes to work together in a way that is both incredibly meaningful and sustainable.

“For me the deep value and deep grace of it is that we’re not falling into siloed congregationalism, and that the fact that we are sister parishes is so deeply evident,” Lonergan said. “Practically, it’s made my life easier, but theologically it’s deepened my understanding of what it means to not just care about one’s own parish to the exclusion of everyone else. We don’t need to do everything together because that’s unsustainable but we can do some of the things together and oh, that is such a gift.”

At the end of the Lenten dinner series the parishes will share in their collaborative Easter Vigil, which has gathered up to 200 people in past years, and has become a crucial part of their work together.

“The Easter Vigil has turned into just such a celebration,” Lonergan said. “It’s a real privilege to get to hear your colleagues preach and celebrate, and to see the good work that they’re doing in their own churches.”

Dr. Janet King is the music director at Trinity Church in Haverhill and has participated in the vigil for many years.  She noted that it allows smaller parishes the gift of being able to do more together than they could do alone.

“It is noteworthy because it permits small parishes to present an elaborate service such as the Easter Vigil, and provides the opportunity to collaborate and to produce something great together.  Together we can do things that are greater than the sum of the individual parts,” King said. “Relationships between and among members of the involved parishes have been made and strengthened in ways that would not happen under ordinary circumstances.”

Each year, a different parish in the collaborative hosts the vigil.  This year it will be hosted at All Saints' Church in West Newbury, where the Rev. Derrick Muwina serves as vicar.

"We are very excited to host the Easter Vigil this year because the Easter Vigil sets the tone for Easter and the rest of the year," Muwina said. “The main benefit of this service is that parishes feel a great sense of community, that they are part of the greater diocese.” 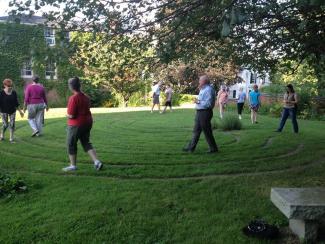 Over the years, the involved parishes have done a variety of activities together, from shared worship and Bible study, to combined vestry retreats and Confirmation classes, to a labyrinth walk series at St. Paul's Church in Newburyport. They have participated in different kinds of workshops together and even rented buses as shared transportation from the Merrimack Valley to diocesan events. They have also formed affinity groups in which people from the different parishes can get together and share fellowship--whether it is choir members and musicians gathering to create music together, or all of the wardens meeting for coffee and conversation.

At Christmastime, the parishes have placed an ad in their local newspapers, listing all of the Christmas services offered at each of the Episcopal churches in the area. This reflects the participating parishes' goal of presenting themselves not as separate churches, but as part of the wider Episcopal Church in the Diocese of Massachusetts.

The Lower Merrimack Valley Collaborative originally began when these six parishes went through clergy leadership transitions at the same time. Their new priests started engaging in conversation with each other and figured that there had to be things that they could do better together than separately.

The Rev. Canon Martha Hubbard, who now serves as the regional canon for the diocese's Northern and Western Region, was one of the original six priests who helped start the collaboration when she was serving as the rector of St. Paul’s Church in Newburyport. Hubbard explained that the participating parish leaders started by asking the question of how they could be the Episcopal Church presence together in their part of the world, and how they could work together effectively.

“We tried to always think about how we could communicate out to the larger community about who we were and what we offered,” Hubbard said. “We just became really aware of who’s got what gifts and how we can work together so that not every parish has to try to be all things to all people.”

The collaborative has been awarded diocesan Congregational Development Grant money since 2012 to pay for the lead collaborator as well as expenses such as transportation, music, workshop materials, facilitation of retreats and other expenses.

As part of their grant request, the involved parishes committed to each put in $500 a year towards this ministry, and some parishes do it twice a year. In addition, neighboring St. Andrew’s Church in Methuen has collaborated with the LMVC and has made a voluntary contribution to the collaborative's work for the last few years. Pickard explained that though this financial support is helpful, the participants never want money to prevent one of the parishes from being part of the collaborative.

Pickard makes it a point to say that there is nothing wrong with smaller gatherings or services, but just that, if the desire is there to worship or be together in larger numbers, this collaborative offers an easy and meaningful way to do that.

“Never ever am I saying that something small is wrong; we support that as well,” Pickard said. “Whenever two or three are gathered, Christ is in the midst of them--but if we would like to have more, it’s wonderful if we can connect.”

Regional Canon Martha Hubbard said that building collaborations from the grassroots up is a good thing, especially when about half of the congregations in the diocese are served by part-time clergy.

“I think sometimes we think about collaboration when we’re trying to figure out how two parishes who are using part-time clergy can share one. I would say that might work, but it will work really well if there is already collaboration among them,” Hubbard said. “If you’ve broken down barriers and people are thinking of themselves as a larger whole, that’s when clergy serving several of the congregations will work best.”

Hubbard said that she can see the possibility for similar collalborative groups of parishes in other areas of the diocese.

“I think it will take on its own local flavor in how it will be organized,” Hubbard said. “How they will do it will be different, but it’s the idea that I think could work anywhere. I think this kind of collaborative model really helps people feel companioned and like 'We’re not in this alone, we don’t have to do it all by ourselves.”

The Lower Merrimack Valley Collaborative Easter Vigil is open to all and will be held on April 20 at 7 p.m. at All Saints' Church in West Newbury. For more information contact Helen Pickard at mapickard1@verizon.net. 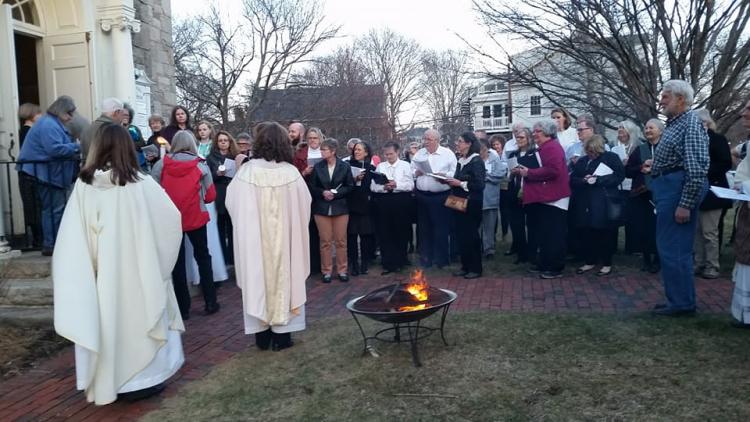 Courtesy Photo Congregations gather at the first fire of Easter at a past year's Lower Merrimack Valley Collaborative vigil.