In the summer of 2018, when the dean of the Cathedral Church of St. Paul in downtown Boston, the Very Rev. Amy E. McCreath, called the Rev. Stephen Harding, the soon-to-be rector of Grace Church in Vineyard Haven, on the island of Martha's Vineyard, to welcome him to the diocese and his new position, neither realized that their conversation would lead to a friendship between the two congregations more than a year and a half later, at a time when a global pandemic would be requiring everyone to change the way that they worship.

“We ended up having this really long conversation, and what was surprising, but really clear to us, was, even though our congregations are in very different communities and have very different demographics, they actually have a lot in common,” McCreath said in an interview. “They’ve both been through a lot of challenges in recent years and are finding their ways on the other side of that.” 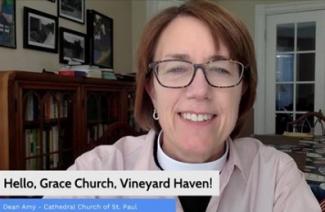 At the time, the congregations had individually decided that they were unable to participate in the diocesan Indaba program geared towards building relationships among congregations through purposeful in-person conversation, but inspired by the project, McCreath and Harding resolved to do a sort of “mini-Indaba” where they could have members of each congregation visit the other and share worship and fellowship together. When the COVID-19 pandemic hit however, it became clear that the sort of in-person exchange that they had imagined would now be impossible for some time.

When McCreath saw that the pandemic had both congregations worshiping online via Zoom at 10 a.m. on Sundays, she figured she would see if they could continue with their plans to visit each other’s congregations, albeit virtually--an idea that Harding was all for. 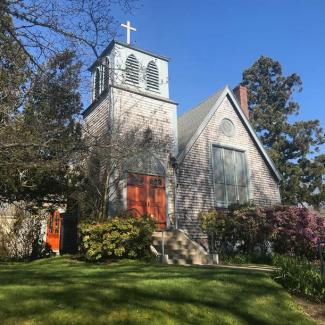 “What was so special about the recent combined services was that we felt a part of something larger than our own parish,” said Jeff Spear, a lay leader from Grace Church, in an e-mail. “Hearing Dean Amy tell the story of Jesus’ night before he was crucified reminded us that in uncertain times there is the glue of love that holds us together for better times. I think the future of our ministry will be to come together as one large parish made up from many parishes and enjoy the diversity of approaches to faith.”

“There are so many things that are terrible about this season,” McCreath said in the interview. “There’s so much that’s hard and there is so much suffering and loss; we are all grieving the things we can’t do. But all of a sudden there is this new possibility to live into the [diocesan] mission strategy that’s not that hard.”

Harding similarly spoke of this endeavor as a hopeful project, particularly as recent protests against police brutality fuel an international conversation about systemic racism in our society.

“For me, this is hopeful,” Harding said in an interview. “It’s a way out of this morass. High-performance crisis leadership means that you form networks, you exchange ideas and then you align the core efforts. That’s how I think we as people of faith can overcome what I can only consider contempt and division. I wasn’t thinking this way when we started this; we just want to get to know each other. But now with the divisiveness and the racism, this kind of network relationship is so important in stopping it. 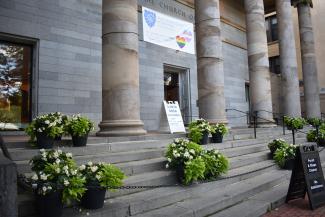 Bridget K. Wood The steps of the Cathedral Church of St. Paul, Boston in June of 2019

“I think we’re stronger together, and it is very easy to stay in one’s own isolated perspective,” Harding continued. “That doesn’t serve the church, our diocese or the world at all. I see these shared services as a means to connect and deepen relationships and build a platform that can change things.”

“Even in the times of Zoom exhaustion; even in the face of recorded hymns by the schola and the deep mourning for a physical gathering, our congregations were able to celebrate Christ in a new and exciting way,” said Rhea Ranno, who serves as co-convener of the Sunday Council of the Cathedral Church of St. Paul, in an e-mail. “All of a sudden our services were twice as big; unknown faces in coffee hours became friends in the journey towards a message of an all-liberating God: a God who loves each of us unconditionally; a God that desires for us all to be free.

“In joining with Grace Church, we were reminded of the name from which that congregation draws its ministry. Where one or two or hundreds of us are gathered, so does grace exist and triumph,” Ranno continued. “In a time when it is so very understandable to be lonely and powerless, we were given a chance to smile and heal. Thanks be to God.”