"What Jesus would want to see me doing": Youth leaders reflect on movement against gun violence

Being a young person in the U.S., I can safely say that the March for Our Lives movement has been the most inspiring movement in my teenage years. Not only do I full-heartedly agree with the goals of this movement, but I am also encouraged by the extent to which youth voices have galvanized people who believe in the same goals.

The movement was sparked by youth at Marjory Stoneman Douglas High School, in Parkland, Florida, after a 19-year-old young man gunned down students and faculty at the school on Feb. 14. Gun violence has been an epidemic in our country for decades. I believe there are currently not strict enough gun-control laws to prevent the rising gun homicide and injury rate in the U.S. As a young person, I am inspired by the eloquence and work ethic of the students from Parkland and their team's incredible efforts to reduce the epidemic of gun violence in this country.

My name is Elena Sanborn, and I am from Amesbury. I have attended St. James's Church in Amesbury for the past seven years, and have been a member of Diocesan Youth Council (DYC) for two years. I consider myself an active member of the March For Our Lives movement. I helped organize a 17-minute walkout at my school on March 14 (although it was postponed until the 15), and I attended the March For Our Lives in Boston on March 24.

My community of Amesbury is not severely affected by gun violence. With its low crime rates and a strong sense of community, I genuinely feel safe walking around my city. However, my experience on DYC has introduced me to other youth who do not have the same experiences as me. I have heard other members express that gun violence is a serious issue in their communities. I am fortunate enough to say that gun violence has not directly affected me; however, I can strongly relate to the value of feeling safe in one’s school and community. This is why I stand with my brothers and sisters in Parkland, marching on Boston Common in support of legislation so that people will never have to experience the tragedy that they and so many other Americans have.

In school, we discuss ethical, logical and emotional appeal and how they can be used to provide support for movements and arguments. In this particular movement, I believe that the ethical and logical arguments are evident, but a national emotional appeal for the war on gun violence has been lacking. Listening to a student tell the story of her friends being the victims of a mass shooting provides a powerful image and impact on those who have not been affected by gun violence. I believe that youth voices can express an emotional and powerful view on the gun violence epidemic that wasn't evident on a national scale previously.

In that spirit, I have collected some perspectives from youth in our diocesan community who have been involved in youth-led actions to end gun violence.  I hope that by listening to their voices, we can learn from each other's experiences and be motivated to keep speaking out for everyone's safety. 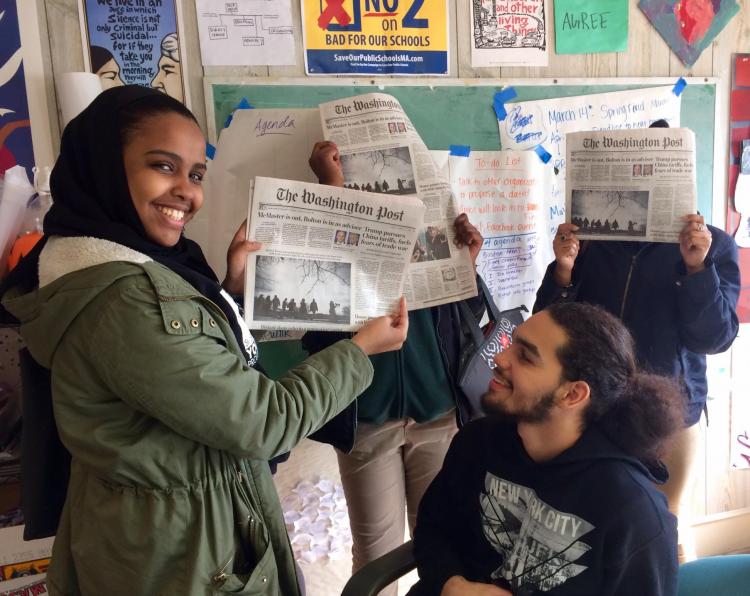 Courtesy photo B-PEACE for Jorge Campaign leaders who participated in a protest at Smith & Wesson in Springfield garnered national news attention for their witness against gun violence.

Teens who are part of the B-PEACE for Jorge Campaign and youth programs at St. Stephen's Church in Boston helped lead a March 14 protest at the Smith & Wesson factory in Springfield, and some also participated in the March For Our Lives.  Here is what some of them had to say of their experience:

Ekran Sharif: "It was a great experience to lead an action of youth all across Massachusetts coming together to ask Smith and Wesson to stand with us."

Michelle Mejia shared her disappointment that gun manufacturers seem to care more about money than people's safety: "I wonder how they would react if a loved one of theirs was hurt or killed with one of their own weapons."

Christopher Morales: "The D.C. March For Our Lives made me feel like everyone who had come from different parts of the world were united on this issue."

Nikkia Jean Charles: "My experience in D.C. was very powerful--it was moving to see how many people cared about ending gun violence."

And from two peers on the Diocesan Youth Council: 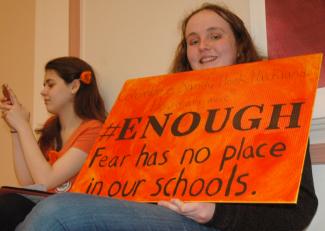 Tracy J. Sukraw Students at the Cathedral Church of St. Paul in Boston during the March 14 walkout.

Maggie Young, 17, St. Paul's Church, Natick
How does gun violence affect your community?
“I am not super affected by gun violence because we are in a suburb and we do not really have high crime rates. But by being a part of DYC, I could see people’s different perspectives on this issue and everyone lives in a completely different situation. This conversation made me realize that this is a huge issue in other areas.”

What did you learn from your experience at the walkout?
“I was surprised by how many people participated in the walkout. When we were outside, everybody was silent and respectful, and in a high school setting sometimes that is hard. It was really cool to see how passionate my school was about this issue.”

Why is it important for youth to have a voice on this issue?
“Because otherwise nothing will change. The more people get involved and do something about it the faster change can happen! I think that youth are unique in that we have the mindset of change and the youth have always been the people that make the biggest difference because they are the most passionate about creating better lives for themselves.”

My walkout story:
“Me and my friends are a part of Best Buddies, which is a club where students are partnered with students with disabilities. You are their buddy and go around and help them with the things that they do. During the walkout, we wanted to make sure that they had the opportunity to be involved so we went back into the school and brought them outside with the rest of the student body. We stood with them and helped them understand what is going on and it was great to be able to stand side by side with them.”

Sarah Tringali, 18, Christ Church in Andover
What did you learn from being at the walkout and protest?
“I learned that there is a lot more youth behind this movement than just the select few that are representing the movement in the media. It was striking to see how many people my age were there, because when my family and I went to the Women’s March in 2017, there was a much more diverse age range. On March 24th, however, the vast majority of protesters were young people. It is incredible to see that it is not just Parkland survivors that are running this movement, it is students affected by gun violence across the country.”

Why is it so important for youth to speak out against gun violence?
“It is important particularly for youth to speak out for this movement because it is something that affects us. Many times, with these types of protests, I find that it is hard to emotionally relate to the people being affected. Of course I support the Black Lives Matter movement, but racism is not something that I have had the burden of experiencing in my everyday life. But with this movement, I can relate to the fear that students have when they hear a loud noise in the hallway, or the anxiety of having to run drills prepping us if a shooter enters our school. If the youth continue to speak out about it, I think that politicians will take action. It is no longer 'My kid is feeling scared' but 'I am feeling scared'--with a face to connect to the line."

How can your actions to speak out against gun violence relate to your faith life?
“I was always told when I was growing up to love your neighbor as yourself. As I grew up, I started to see more and more hatred come out in the community with gun violence, but also with racism, sexism and discrimination, and it does not connect to the values I was taught as a kid. The way I see it, my participation in this movement is to reaffirm what my values are and what I am passionate about. I find myself loving the students and advocates around the world, because I believe that that is what Jesus would want to see me doing--#WWJD.”

Opinions expressed in Reflections are those of the writers.  Submit Reflections for consideration to news@diomass.org.