In pursuit of peace, 14 people from the Episcopal Diocese of Massachusetts traveled to Chicago April 20-22 for a conference entitled "The Unholy Trinity:  Poverty, Racism and Gun Violence."  The three-day event was the second conference convened by Bishops United Against Gun Violence, a group of more than 60 Episcopal Church bishops from across the country who are dedicated to using their power as people of prayer to combat the scourge of gun violence that plagues all of our communities.

Bishop Alan M. Gates, a member of Bishops United Against Gun Violence, assembled a broadly representative team from our diocese, including members of the B-PEACE for Jorge campaign and Episcopal City Mission, to both learn and teach about what it takes to work for peace as people of faith.  We were a proudly diverse group:  we were from suburban and urban neighborhoods; we were white, black and Latina; we were immigrants and American-born; we were clergy and laity; we were teenagers and we were gray-haired. 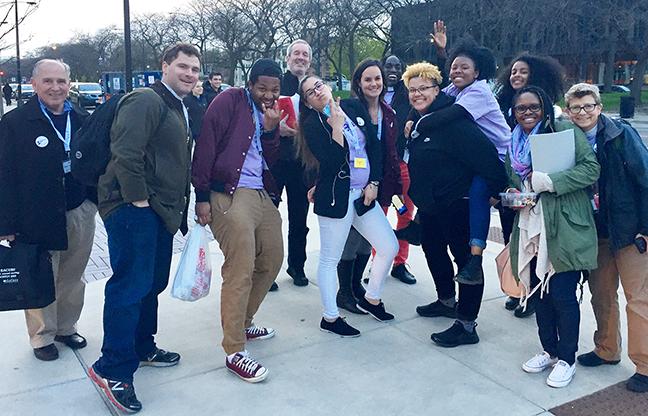 The conference sparked much learning as well as the opportunity to share the kind of peacemaking work that we, in the Diocese of Massachusetts, have already been engaged in for five years through the B-PEACE for Jorge campaign.  We had one of the largest delegations from a single diocese at the conference and our teens led a very well-received workshop detailing their work addressing the root causes of community violence and modeled youth leadership in peacemaking.

During our time at the conference, it became clear 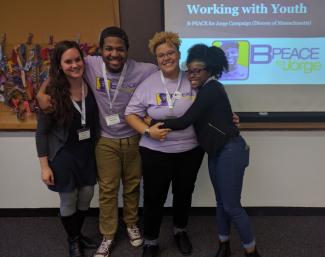 Courtesy Photos Young B-PEACE leaders offered a well-received workshop. that to approach any of the single arms of the unholy trinity meant approaching them all, for like the Holy Trinity, they are indivisible.  The sin of racism is embedded in our national founding and our continuing story.  This inherently leads to the economic poverty that disproportionately plagues some in our country.  Business decisions by gun manufacturers and distributors are deliberately made so that guns are more readily available in some communities, usually those that are more economically disadvantaged.  And so on.

For those who wish to pursue peace, these three aspects of the unholy trinity are stubborn obstacles to bringing about the kingdom of God on earth as it is in heaven.  And it can be discouraging, which is why the inspiration, motivation and information we received at this conference was so critical.  Above all, the leaders from the Diocese of Massachusetts were convinced of the need for churches to partner with those organizations already engaged in this work.  We need to bring a spirit of humility and a willingness to follow where they lead.  There is much good peacemaking work already going on and much more that Episcopal churches can and must do to support that work; this is true no matter the context of our own congregations.

Our days were grounded in prayer and song, bracketed by intensive and fruitful Bible study, using the contextual Bible study method of reading our holy text.  Such spiritual grounding for the conference reminded us that we would not be able to transform the world if we were not first transformed ourselves.  As our leader, Professor Dora Mbuwayesango of Hood Theological Seminary said, “Bible study is always for transformation that leads to change,” and that proved true for all of us who participated in it.

This firm spiritual foundation led to all the learning and action in which we then engaged.  On the first night, we heard about the ongoing traumatic effects of gun violence from a young man from Chicago who had been shot five times.  Though he survived, he has struggled to regain his emotional well-being long after his body has healed.  On the second day we heard from three speakers:  The Rev. Kelly Brown Douglas, Canon Theologian at the Washington National Cathedral; The Rev. Julian DeShazier, a hip-hop artist and pastor in Chicago’s Hyde Park neighborhood; and journalist and author Natalie Moore.  They offered a joint address that used erudite theological and sociological teaching, pastoral vignettes and spoken-word performance, and stories of local realities to challenge all of us, especially people of means and privilege, to be better partners in working for peace.

We then had the chance to participate in a number of smaller break-out sessions, such as “Healing after Trauma,” “Working with Legislators,” “How to Work with Evangelicals on Issues of Gun Violence” and the session many of our group felt was the most helpful and informative, “Working with the Black Lives Matter Movement.”  We gained an enormous amount of resources from these and other workshops, resources we plan to share broadly to all who seek peace in this world and want to pursue it. 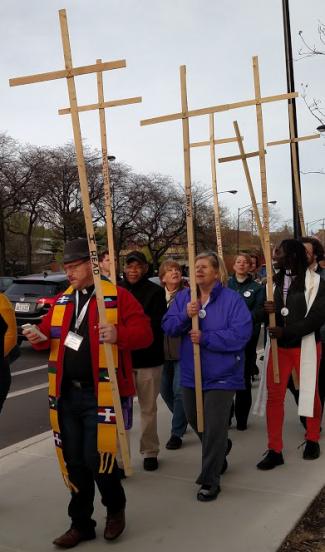 The goals for the team from the Diocese of Massachusetts in attending this conference were to strengthen our networks, to share our particular resources and to enrich our treasury of peacemaking skills.  In achieving these goals, participation in the conference can be considered an unqualified success.  As Kesanet Tesfazion, a B-PEACE for Jorge youth organizer from Boston said, “I got a lot out of the Unholy Trinity Conference.  I gained greater awareness of the impact of gun violence, racism and poverty…I also was able to discuss these issues and hear various perspectives as well as solutions.  The resources offered and dedication I observed was astonishing.  Overall, I was exposed to many of the challenges facing those who are combating these issues and learned from the personal accounts speakers shared.”

And yet, resource and network building were not the only benefits of our time together.  More than anything, what we got out of this conference was a renewed sense of purpose and devotion to working for peace in our world.  All of us echo the words of the Rev. Jacqueline Clark, Associate Rector of St. Elizabeth’s Church in Sudbury, who said that this conference “has deepened my commitment to this work and challenged me to be more courageous.”

Those who traveled to Chicago all came back committed to continuing this work.  We invite you to join us as we redouble our efforts to combat the sinful spiritual and political forces of racism, poverty and gun violence that run, but do not rule, this world.  Taking on this work is part of our call from our 2016 Diocesan Convention, and it is essential to our identity as Christians.  Join with B-PEACE as we walk in support of the Louis D. Brown Peace Institute in the Mother’s Day Walk for Peace on May 14.  Join with Episcopal City Mission as it combats economic injustice by partnering with community organizations.  Be a part of the upcoming roundtable conversation being convened by Bishop Alan M. Gates to bring together leaders actively engaged in peacebuilding work.  To join these and other efforts to build on the peacemaking work happening around our diocese, contact bpeace@ststephensbos.org.  And stay tuned for more opportunities to take action in your community as we live into our Christian call to combat the unholy trinity of racism, poverty and gun violence.

“'Blessed are the peacemakers, for they will be called children of God.'” (Matthew 5:9)

Opinions expressed in Reflections are those of the writers.  All material is subject to editing. Submit Reflections for consideration to news@diomass.org.