[Episcopal News Service] It was the first day of the summer B-SAFE program in the Diocese of Massachusetts, and one girl in Priscilla Alcantara’s group kept wandering off, unwilling to talk to the other sixth-graders because her friends were in a different group. Alcantara, a teen staff member, asked if she wanted to talk to her instead.

Alcantara, 17, stayed with the girl and helped her meet the other kids. “I just feel like, if I didn’t 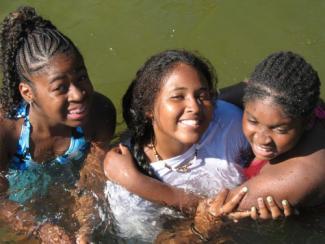 Seventeen-year-old Priscilla Alcantara, center, enjoys a swim with some of the students she helps supervise in the Diocese of Massachusetts' B-SAFE program. talk to her, she would never have met new people. … But she noticed that they were just as nice as her friends, so she made new friends.”

Shy youngsters have been making friends for 13 summers at the Bishop’s Summer Academic and Fun Enrichment Program, which serves 625 elementary and middle-school children and 125 teen counselors-in-training and staff in eight locations in the Boston area. Four days a week, the youngsters attend morning academic programs followed by lunch, reading time and afternoon field trips to parks or cultural institutions. Fridays, they take day-long field trips outside the city, usually to a farm, park, lake or beach.

Spearheaded by St. Stephen’s Church, an Episcopal mission church in Boston, B-SAFE partners with 52 Episcopal churches in the diocese and about 1,000 volunteers to provide lunches, field trips and other assistance. The summer program complements a year-round after-school enrichment program for students that includes leadership training and college and career mentoring for teens. Funding comes from the diocese, donors and foundation grants. A city jobs program refers most of the teens who form the summer staff; many attended the enrichment programs themselves.

The children and teens come from the neighborhoods around the program sites–mostly Episcopal churches–and reflect those neighborhoods: often living in public housing in families receiving public services, attending underperforming public schools, sometimes coming from foster homes or involved with the court system, said the Rev. Liz Steinhauser, St. Stephen’s priest associate and director of youth programs. They represent varied cultural and religious backgrounds. “The majority of the kids that we’re working with would not have a summer program to go to” without B-SAFE, Steinhauser said.

The Boston program is among Episcopal initiatives, many of them at diocesan camps, spanning the country that offer summer fun and enrichment to youngsters who might be unable to afford them otherwise. Some provide general scholarship aid; others target particular populations, such as children with incarcerated parents.

The B-SAFE and year-round Boston program help make city Episcopal churches relevant and build connections within neighborhoods and between urbanites and suburbanites, Steinhauser said. “By figuring out a way to bring suburban volunteers together with urban young people, we’re serving the body of Christ. We’re making the connections between churches that wouldn’t otherwise have the opportunities to interact.”

The programs help bridge the education gap between poorly funded urban and wealthy suburban schools. Research shows that the biggest gap occurs because of the educational offerings children in the wealthier districts receive outside school and during the summer, Steinhauser said.

Participating teens benefit from meaningful jobs, training around issues such as healthy relationships and bullying, and the chance to visit colleges and receive mentoring.

Michael Cordero, 16, entered the St. Stephen’s program as a third-grader and now is a staff member working with third and fourth graders for the summer.

“St. Stephen’s just kind of opened up…a whole new world,” he said. “The neighborhood I’m in, it’s not bad. It just doesn’t have as many opportunities as it should.”

St. Stephen’s has given him a job, the chance to see and learn new things and just be himself, he said. “When I was little, I always wondered: Why are they so nice? They’re not being nice; they’re just kind of being them.  …Since I’ve been here so long, it’s not hard for me to be nice. It’s just easy for me to give back.”

Alcantara said it had opened doors for her as well, including involving her in community organizing and service during the school year. Last year, that included reopening a greenhouse at a local school. The program is “part of the community, so they try to better everything around me,” she said.