Sept. 18, 2012:  Over-capacity congregations flowed this week through St. Stephen's Church in Boston's South End in remembrance of Jorge Fuentes, 19, a beloved B-SAFE program member who was shot and killed on the street outside of his Dorchester home on Sept. 10.  (Read Boston Globe coverage here.)

An estimated 1,000 people came to the wake on Monday, Sept. 17, and 300 people walked in a candlelit vigil in the neighboring Villa Victoria as a witness for peace and ending gun violence.  A congregation of about 550 people spilled out of the sanctuary for the funeral the following morning and filled two additional rooms set up with closed-circuit broadcast of the service.  (The text of the Rev. Timothy Crellin's funeral homily is attached as a PDF below.)

Fuentes joined B-SAFE as a child in the program’s first year and grew up in it, eventually 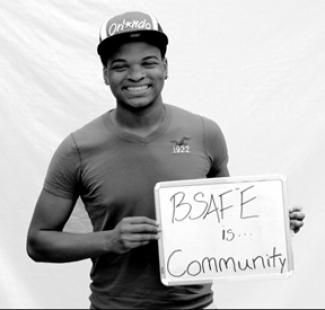 Jorge Fuentes becoming a site assistant and then lead counselor.  In conversations last week, his mentors at St. Stephen's recalled how he had participated in every activity and opportunity offered through B-SAFE and its companion afterschool program, B-READY--including summer camp at the Barbara C. Harris Camp and Conference Center in Greenfield, N.H., and mission trips with St. Anne's-in-the-Fields Church in Lincoln.  He had just graduated from Madison Park High School and wanted to join the U.S. Marine Corps.

He was from the beginning strong willed, they said, and they credited his own hard work as well as that of his mother, teachers and staff at St. Stephen's for what they described as his transformation into a mentor and role model for other young people.

"He was a terror as a kid," the Rev. Timothy Crellin, Vicar of St. Stephen's, said. "But we didn't give up on him like other programs might have, and he overcame a lot.  That you can invest 13 years in a kid, see him do everything as right as he could to take advantage of that, and then this happens--it's outrageous," Crellin said.

St. Stephen's started its program in 2000 to give neighborhood kids a safe and productive place to be during the summer weeks.  Diocesan support was ramped up several years later when Boston's mayor, Thomas Menino, during a summer of escalated street violence, challenged the Episcopal churches in the city to do more for the kids in their neighborhoods.

This past summer, the expanded B-SAFE (short for Bishop’s Summer Academic and Fun Enrichment) program served 625 children at six Episcopal church and school sites in Boston and Chelsea, and gave leadership training and jobs to 125 teens.  Nearly 1,000 volunteers from 55 Episcopal church partners give donations and hands-on support to the program every summer, making lunches and organizing field trips for the children and reading books with them.  (Read Episcopal News Service's recent feature, here.)

"You know, Jorge was doing everything we hoped would come from B-SAFE, not the least of which was connecting Episcopalians in the suburbs with the Episcopal Church's work in the city," Bishop M. Thomas Shaw, SSJE said during a pastoral visit to St. Stephen's Church after the shooting.

He is convening a small group to help discern what meaningful action the diocesan community might take next.  "We need to focus now on caring for Jorge's family and St. Stephen's in their grief, and then, because the community of the diocese was Jorge's community too, we need to do something that is not only about continuing to try to meet immediate needs but also somehow addresses underlying causes of violence like this."

Fuentes, with his family, was a longtime member of St. Stephen's Church.  Among those grieving his death are his mother, Mirna Ramos, his brothers, Carmelo, Jonathan and Jasmany, and his sister, Alcimaris.