Listening sessions in May to further year of discernment toward reparations

Last November’s Diocesan Convention adopted a resolution that 2022 be used as a year of study and discernment “in the name of repentance, reconciliation and accountability to the descendants of enslaved Africans and their communities.”

It also asked, in part, that the Racial Justice Commission help the diocesan community come to a broadly accepted understanding of what form reparative actions might take.

To that end, the commission’s Subcommittee on Reparations has produced a “Reparations Toolkit” of resource materials and a “What is Truth?” Lenten study program, both intended to help lay a foundation for the work of discernment and deliberation ahead.

The Subcommittee on Reparations is now organizing a series of regional online gatherings in May that it describes as listening sessions, open to all. 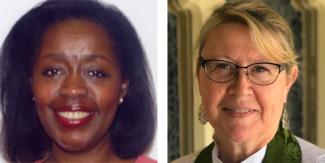 Courtesy photos Constance Perry and The Rev. Carol Morehead First person:  Read more about why they're drawn to the work of making reparations, here.

“We want to hear from everyone.  Everyone.  Because everyone’s voice matters.  Everyone’s opinion matters,” Constance Perry, a co-chair of the Subcommittee on Reparations and a member of Trinity Church in Boston, said in a recent interview via Zoom.  She was joined by the Rev. Carol Morehead, a subcommittee member and the rector of Grace Church in Medford.

"It's about the questions much more than the answers at this point," Morehead said.  “We need to know where people are, and so the listening gatherings are the opportunity for people just to share: When you hear ‘reparations,’ what do you think of?  How do you understand that?  And what questions might you have?  It’s a way to take the pulse of the folks in the diocese and allow people to share their perspective at this moment."

The sessions will be hosted by the Subcommittee on Reparations and the regional canons, and will be held online via Zoom.  [Scroll down for full schedule, posted below.]

“’Reparations’ is such an emotionally charged word, and people have a variety of understandings of what it is—just the fact that we’re talking about reparations may be startling—so these gatherings are intended to create a safe space, a sacred space, that is truly about listening.  It is not about debating.  It is not about judging what someone says.  It’s listening with our hearts and minds to what people are thinking, feeling about reparations,” Perry said.

Many hear the word “reparations,” she said, and think it’s solely about writing checks to individuals.

“In some instances and some places, that’s what reparations has been. In our diocese, there will be a monetary restitution”—the convention resolution calls for an operational reparations fund by 2024—“but that’s not the only form that reparations can take and it’s not the only form that we’re considering,” Perry said.  “It’s also about acknowledging and addressing the harm that was done to people.  It’s naming it.  It’s confessing.  It’s lamenting.  It’s repentance.  All of that is a part of what we consider to be reparations.”

“Together with feedback we will be receiving from congregations that are using the toolkit, feedback from congregations that are using the Lenten series, these listening gatherings will be giving us a lot of information, and they will be helpful in helping us discern what the reparations process might be  for our diocese:  the who, what, when, where, why and how,” Perry said.

“One of the things we’ve heard from many of the people who have been doing this kind of work is that they’ve listened to the people across their diocese.  They’ve done a lot of research and processing and discerning.  And then, as a diocese, they have made decisions together.”

That’s why the Subcommittee on Reparations needs to hear from a broad range of voices now, both Perry and Morehead emphasized.

“I think one thing that is really important is that people in the diocese have a sense of partnership, of collaboration, in this process,” Morehead said.  “We don’t all have to agree.  We really want to know and need to know what the many voices are, and what the thoughts and concerns and desires are, so that as the decision-making process is entered into, there really is a kind of groundswell of collaborative work that we do together.”

She added: “To anyone in the diocese who’s ever said, ‘Well nobody ever asked me'—we’re asking you.”

Updated April 7, 2022, to include registration link.