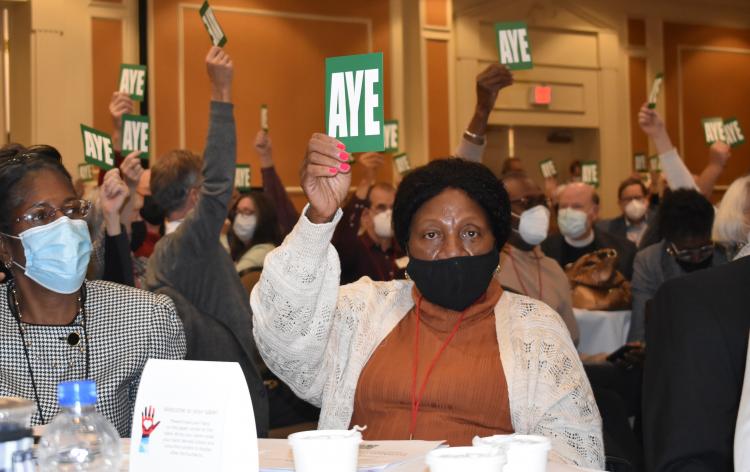 In a vote described as historic by many in attendance, the 237th annual convention of the Diocese of Massachusetts, meeting Oct. 28-29 in Danvers, approved the creation of an Episcopal Diocese of Massachusetts Reparations Fund "as part of our effort to address our legacy of wealth accumulated through the enslaved labor of Africans and Afro-Caribbeans on our behalf and for our use today."

The convention resolution calls for an initial pool of approximately $3 million to generate investment income for the new reparations fund. That pool is to be established in part with 15 percent of the diocese's unrestricted agency and Diocesan Council-designated endowment funds. The resolution calls for additional commitments of 15 percent of the annual draw from unrestricted trusts and bishop-directed funds, as well as 3 percent of income from parochial assessments until the reparations fund exceeds $11.1 million. The resolution also urges contributions from congregations, organizations and individuals.

Put forward by the diocesan Racial Justice Commission, the newly adopted resolution builds on previous convention votes in 2020 and 2021 to advance diocesan work toward repentance and accountability, and it follows a designated year of diocesanwide study and discernment that included the provision of a "Reparations Toolkit" of resource materials for use by congregations, a Lenten study program and a series of online listening sessions last May.

The Diocese of Massachusetts, among The Episcopal Church's oldest, was established in 1784, and although slavery had been made unlawful in Massachusetts in 1783, the slave trade and its related enterprises continued to enrich many church benefactors into the 19th century. 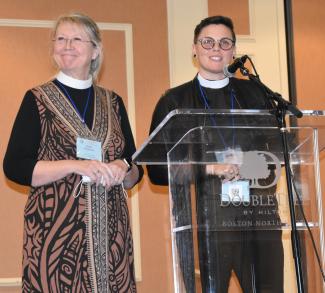 Tracy J. Sukraw The Rev. Carol Morehead and the Rev. Tamra Tucker present the resolution to create a Diocese of Massachusetts Reparations Fund.

"In past years when discussions about reparations arose, I confess to you that I was once on the fence," the Rev. Carol Morehead said during the resolution's presentation to the convention.  She is a member of the Racial Justice Commission's Subcommittee on Reparations and the rector of Grace Church in Medford.

"I asked the questions that many among us today may ask: Why now? Can we afford it? Will it hurt other ministries? How will the money be spent? And who decides? And through the deep work of listening, study and prayer over several years, I've come to ask a very different set of questions," Morehead said. "How can we justify not giving back something that was built on the backs of others? How can we allow the deep breach to go unrepaired? What is the cost if we don't do this? How much more will so many vital ministries thrive and grow with reparations?"

When the call for the vote came, a wave of green "Aye" voting cards rose across the room and the resolution was adopted without debate or dissenting votes.  "The resolution carries and the hard work continues," Bishop Alan M. Gates announced following sustained applause.

The resolution does not detail how the reparations fund will operate, instead putting authority for making disbursements "in the hands of a body made up predominantly of people from the communities suffering generations of harm."  That body's composition and guiding principles are to be presented by the Racial Justice Commission for approval at next year's Diocesan Convention.

In his annual address to the convention earlier in the day, Gates voiced his support for the reparations fund resolution even though its called-for allocations are likely to significantly impact other parts of the diocesan budget.

"No one is more aware than I am that we do not yet know what sacrifices will need to be made in order to keep the commitment if we act today," Gates said.

"From my perspective, that is precisely the point.  The commitment we are invited to make today names the enterprise of racial justice and repair as a non-negotiable priority, as something we are committed to fund 'off the top' and not just with whatever is left over after we do everything else we're already doing.  It places this work in the highest tier of our mission priorities," he said.  "It asserts, simply, that this is a generational obligation, and that the time is now." 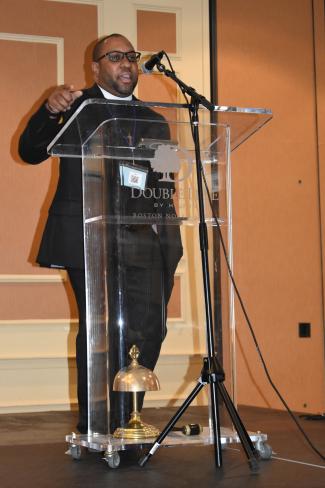 The convention went on to approve a second resolution from the Racial Justice Commission that adds new cross-cultural learning, practice and peer support components to the formation process for postulants and candidates for ordination, toward the goal of better "equipping ordained leaders for the work of becoming the Beloved Community."

Three additional resolutions adopted by the convention call for minimal compensation and Church Pension Fund contributions for deacons, who typically serve without pay, so that they can access CPG's financial planning and investment programming; to support and engage with the Poor People's Campaign; and for education and exploration toward fostering right relationship with Indigeneous Episcopalians and neighbors, with a Sunday to be designated annually "to honor the people indigenous to the lands we now know as the Episcopal Diocese of Massachusetts as well as those Indigenous people currently living in our midst."

The convention also took time to recognize and thank Bishop Gayle E. Harris as she prepares to retire after 20 years as the diocese's bishop suffragan, with a fund to be established in her honor to support leadership development for women of color.

Gates has opted not to call for the election of a successor bishop suffragan. The convention voted to create an assistant bishop position and authorized Gates to appoint an eligible bishop to that position, with the advice of the Executive Committee of Diocesan Council and consent of the Standing Committee.

The convention also approved the $9.4-million diocesan budget proposed for 2023 and elected deputies to the 2024 General Convention of The Episcopal Church.

Find all resolutions in final form, election results and materials at www.diomass.org/diocesan-convention-2022.