B-PEACE for Jorge: Our antiviolence campaign

In John’s Gospel, the first gift of the risen Christ to his frightened disciples was God’s peace.  Christ sends us out with the gift of peace, just as he sent out our ancestors in the faith.  Every one of us can be a bearer of peace in eastern Massachusetts and beyond.

The violence which is everywhere in our country profoundly touches all of us.

In September 2012, violence struck at the heart of our diocesan community when 19-year-old Jorge Fuentes was murdered while walking his dog outside his home in Dorchester.  He was an exuberant, remarkable young man and natural leader, adored by the children he mentored at St. Stephen’s Church and St. Mary’s Church in Boston and respected by his peers.  Many in our diocese knew him because he grew up and worked in the B-SAFE summer and B-READY afterschool programs and the Barbara C. Harris Camp of our diocese.

What is B-PEACE for Jorge?

After Jorge’s murder, our former bishop, the late Rt. Rev. M. Thomas Shaw, SSJE, convened a group of clergy and lay leaders to help determine how the Diocese of Massachusetts could take meaningful action toward alleviating some of the root causes of violence in our communities.  The 2012 Diocesan Convention formalized that group and its charge by unanimously voting to create the Jorge Fuentes Antiviolence Task Force.

Through the task force’s meetings, research and discernment, the diocese launched the B-PEACE for Jorge campaign.

Ways to get involved:

Everyone and every congregation is invited to participate in one or more of the B-PEACE objectives, including gun reform and public policy advocacy; educational opportunities; and youth engagement.  For more information visit the blog site maintained by campaign organizers at bpeaceforjorge.net or contact the leadership team at bpeace@ssypboston.org. Follow B-PEACE on Facebook: www.facebook.com/bpeaceforjorge.

Activities and other educational opportunities:

"Repairing the breach":  An op-ed issued by the bishops of the two Episcopal dioceses in Massachusetts voicing support for the Biden administration’s gun violence prevention policies was published on July 21, 2021, on MassLive (view here ), the digital news platform of The Springfield Republican. As the epidemic of gun violence continues to devastate communities, the Biden administration's prevention policies are cause for hope, the bishops write. They speak with one voice in support of those efforts and to encourage all to engage this critically important issue. 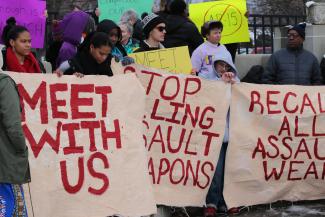 Public actions: B-PEACE, in partnership with the Diocese of Western Massachusetts and the Pioneer Valley Project, continues to participate in youth-led actions at Smith & Wesson in Springfield.  Read more about recent action here.

Mother's Day Walk for Peace: The Diocese of Massachusetts and B-PEACE have had a strong team at this annual pledge walk since 2013, in support of the Louis D. Brown Peace Institute.

Peace MVP Award:  In March 2019, the B-PEACE for Jorge Campaign received the Peace MVP Award from the Massachusetts Coalition to Prevent Gun Violence.  The award recognizes significant and meaningful work by individuals and organizations to stop gun violence in Massachusetts.  Read more here.

"Unholy Trinity: The Intersection of Racism, Poverty and Gun Violence":  Bishop Alan M. Gates and a Diocese of Massachusetts delegation participated in this April 20-22, 2017, conference sponsored by Bishops United Against Gun Violence, with B-PEACE youth leaders presenting at a workshop on the impact of gun violence on young lives and ways to address it.  Read more here.

2016 Diocesan Convention Resolution "Peace Building in the Diocese of Massachusetts": This resolution adopted at the 2016 Diocesan Convention accepts the call from the Episcopal Church's House of Bishops to pray and work for the end of gun violence and urges engagement in several specific actions, including gun law reform advocacy; support for positive youth programs; creation of job opportunities and work with underresourced schools; public witness to raise awareness about the urgent need to end gun violence; and ongoing conversations and programs in communities to increase understanding about the impact and the root causes of gun violence.  Find the full text of the resolution here.

The New Jim Crow 2015 book study:  B-PEACE organizers in 2015 recommended The New Jim Crow by Michelle Alexander as a focus for study and discussion groups in congregations, either during Lent or later in the year.  Alexander's research makes the case that mass incarceration has become a systemic means of marginalizing young men of color.  B-PEACE organizers hope that group study of the book in congregations can spark discussion about the connections between racism, poverty and violence.  A study guide and other resources are available here.

Reclaiming the Gospel of Peace: Challenging the Epidemic of Gun Violence: More than 300 Episcopalians, including representatives for B-PEACE, came together in Oklahoma City in April 2014 to renew their commitment to the Gospel call to make peace in a world of violence.  This book is one of the outcomes of that event--resources to help dioceses, congregations and individuals reclaim the Gospel message of peace for our society.  Available from Church Publishing here.

B-PEACE Resource Day:  Watch the video from our Sept. 28, 2013, B-PEACE Resource Day, which gathered 350 Episcopalians at Roxbury Community College for learning and inspiration about being peacemakers in our churches, schools, homes and communities.  Read more about the event here.