The Rt. Rev. Alan M. Gates has announced the appointment of the Rt. Rev. Dr. Carol J. Gallagher as the regional canon for the Central Region of the Diocese of Massachusetts comprising the 56 congregations, as well as other church-related institutions, in the Boston Harbor, Alewife, Charles River and Neponset River deaneries.  Her anticipated start date is Nov. 1. 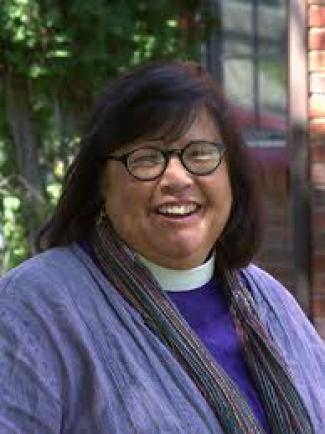 Gallagher has been the assistant bishop in the Diocese of Montana since 2014, developing relationships with Native leaders and congregations there, educating and training clergy and lay leaders in issues of race, gender and inclusion, and leading the Task Force on Native Issues.  She has also been serving during that time as the bishop missioner to the Bishops' Native Collaborative, working with the Episcopal Church Executive Committee to do assessments and respond to needs, and to provide materials and trainings for lay leadership and clergy.  She brings a passion for training and formation for all the baptized and for using her skills in culture, leadership development, pastoral care, and faith and relationship to empower others.

"It is with great joy that I join the team of regional canons," Gallagher said.  "I look forward to serving the people of the Central Region and I bring my years of relationship building, ministry empowerment and creativity to this new venture.  I pray that we can learn and grow together, strengthening the bonds of Christian life while we serve and encourage those around us.  As an Indigenous woman, I also bring my heart which is committed to hospitality and gratitude."

The new regional canon staffing structure is a result of the diocesan mission strategy development process begun in 2015, which surfaced a desire in congregations for closer connections with one another and with diocesan staff.  (Find the mission strategy adopted by the Diocesan Convention in 2016 here.)

Each of the three regional canons will serve a geographic area of the diocese encompassing four deaneries and will have three primary responsibilities:  lay leadership support and development in congregations; transition ministry with congregations and clergy involved in search processes for new ordained leadership; and clergy wellness and family support.  They will be members of the bishop's senior leadership team and will report to the canon to the ordinary.

"I am delighted that Carol Gallagher has accepted my invitation to serve as a regional canon here in the Diocese of Massachusetts," Gates said.  "As a colleague of more than 30 years, I know of Carol's dedication to supporting creative and contextually specific lay leadership in congregations of every size, as well as care for clergy and their families.  She is a gifted leader, an excellent preacher and a collegial companion to those with whom she serves.  Places in the church in which bishops serve in a non-episcopal position suggest that, while it will require an extra measure of clarity of roles and boundaries, it will also present a great blessing to all involved.  We look forward to welcoming her in this new capacity."

Before her consecration as bishop, Gallagher was for five years the rector of St. Anne's Church in Middletown, Del.  She also served at Trinity Church in Collingdale, Penn., as priest-in-charge; at St. Martin's Church in Radnor, Penn., as assistant for education; and as assistant at the Cathedral of the Incarnation in Baltimore.

Gallagher is an enrolled member of the Cherokee Nation.  She holds a Bachelor of Arts degree in writing and communications from Antioch College, a Master of Divinity degree from Episcopal Divinity School, a Master of Theology degree from Princeton Theological Seminary and a Ph.D. in urban affairs and public policy from the University of Delaware.  She received the Louisville Institute Award in 2009 and was an Episcopal Divinity School Proctor Fellow.

She has served on numerous church and civic committees and boards, including the Episcopal Church Council on Indian Ministries, the Anglican Indigenous Network, Anglican Peace with Justice Concerns, the Committee on the Status of Women, the Episcopal Divinity School Board of Trustees and the United Way of America National Board.

She is married to Mark Gallagher and has three daughters and three grandchildren.